Nothing but the Night: Leopold & Loeb and the Truth Behind the Murder That Rocked 1920s America 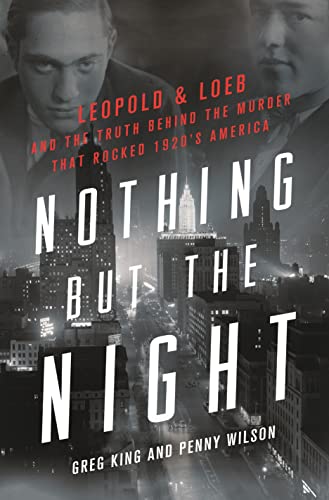 “And there you have the triumvirate of personalities that captivated America at the height of the Roaring Twenties: a match made in hell of two sociopaths, one a manipulator and one a ‘malleable personality,’ and their ethically challenged attorney. What could go wrong?”

In 1924 Chicago, two 19-year-old college students kidnapped and murdered 14-year-old Bobby Franks, cousin to one of the killers, for the sheer thrill of the act. They were convinced they had the superior intellect to commit the perfect crime and get away with it. Yet, these two self-proclaimed geniuses committed enough boneheaded mistakes to lead to their quick arrest and cast grave doubt on their self-analysis.

In Nothing but the Night, authors Greg King and Penny Wilson bring us the story of two of the most infamous thrill killers in American history: Nathan Leopold and Richard Loeb. Scions of wealthy and well-respected Chicago families, their parents enlisted the legal services of the great attorney Clarence Darrow to defend them against the kidnapping and murder charges.

And there you have the triumvirate of personalities that captivated America at the height of the Roaring Twenties: a match made in hell of two sociopaths, one a manipulator and one a “malleable personality,” and their ethically challenged attorney. What could go wrong?

The story breaks down into three acts, which Aristotle’s Poetics tells us is what any good story should do. Act One introduces the killers and the crime; Act Two reveals how the killers were caught through their own bumbling and brought to justice; and Act Three defines the consequences of the crime.

But Nothing but the Night is more than just a historical narrative. The tale of what happened merely scratches the surface. It is the subsurface that provides the substance, the why, as the authors tap deeply into the psychology of the killers, exploding myths along the way. Therein lies the real fascination.

There seems to be a consensus among historians that the crime might never have happened but for the union of Leopold and Loeb, the match made in hell mentioned above. The authors agree. “Individually, Richard and Nathan were damaged but probably not dangerous. It was their coming together that proved deadly.”

But which of the two was the driving force behind the crime? That is one of the myths exploded in the book. King and Wilson note that conventional historical wisdom has painted Loeb in that role. Leopold later perpetuated that perception, painting himself as “helplessly in thrall to Richard, completely subservient to his desires.”

However, the authors believe, and argue convincingly, that the leadership mantle actually falls on Leopold’s shoulders. Conventional wisdom’s misapprehension, they say, may well have been the end product of Leopold’s ability to reshape the narrative while incarcerated in Illinois’ Statesville Prison.

Both Leopold and Loeb were serving life sentences for the murder of Bobby Franks, plus an additional 99 years for the kidnapping, when Loeb was brutally slashed to death by another inmate in the prison shower in 1936. After that, “Loeb was no longer able to contradict anything Leopold had to say,” giving Leopold carte balance to rewrite history, which he gladly did.

The authors even suggest, but offer no concrete proof, that Leopold may have been behind Loeb’s murder. “It isn’t impossible,” they say, “that Nathan might have arranged the attack on Richard with the promise of a financial reward.” That begs the question: Why?

Both men were serving the same sentence, with an admonition from the judge that they should never be paroled. However, the possibility, if not probability, existed that one of them—and only one of them—might well be paroled someday.

In order for Leopold to grab that brass ring, “he needed to become the sole narrator of his own story, to present himself as an unwilling victim, under Richard’s malignant domination and unable to resist his magnetic personality, without objection from his former partner.”

Prime motive, indeed. We’ll likely never know the truth, but the end result was that “[d]eath deprived Richard of the redemption story Nathan soon claimed for himself.”

Leopold was ultimately paroled in 1958. One of the conditions of his parole was that he was forbidden to participate in any publicity activities or personal appearances. But that prohibition excepted his memoirs, which he wrote while in prison, entitled Life Plus 99 Years, for which he had already obtained a publisher.

Once published, it was a commercial failure. Not so, however, a 1956 book written by Meyer Levin titled Compulsion, made into a movie in 1959. Compulsion was a loosely fictionalized story of the Bobby Franks murder case, with characters clearly based on Leopold and Loeb.

Leopold decided that “[i]f he couldn’t get rich from his own memoirs, he would get rich from the proceeds of Levin’s book.” So, he filed a lawsuit claiming that the author and filmmakers had illegally appropriated his name for commercial purposes and invaded his privacy.

The authors also take on Clarence Darrow’s role in the case, and not kindly. Darrow used the trial as much as a platform for his own anti-death penalty views as he did to defend his clients. Leopold and Loeb had already given detailed confessions that varied in only one key point: Who actually killed Bobby Franks? Leopold claimed he was driving the car and that Loeb beat Bobby to death with a chisel, while Loeb told the flip side of that story.

Their guilt already a foregone conclusion, Darrow’s goal was to help his clients escape the death penalty. And so, in a surprise twist at the start of trial, the lawyer pled his clients guilty. That meant all that was left at trial would be sentencing, which could be decided by a judge rather than a jury, and Darrow believed a judge would be more lenient than inflamed members of the community sitting in judgment as jurors.

It also explains one of Darrow’s several ethical lapses during the case. His experts concluded that Leopold and Loeb were insane. But insanity was a defense to a murder charge and, if asserted, it was an issue required by law to be determined by a jury. Since his clients pled guilty, he had to walk a tightrope between using mental illness as a mitigating factor without falling off on the side of an outright insanity defense, which would trigger the jury requirement.

So, it seemed to Darrow that the expedient thing was to suppress his experts’ report that proclaimed his clients insane, then use their carefully coached testimony on mental illness to mitigate his clients’ conduct. “It was a dangerous gamble: If one of [his experts] accidentally mentioned insanity, it would result in a jury trial.”

But then Darrow hedged his bets. The authors strongly insinuate that Darrow “arranged to have the report ‘stolen,’ knowing it would be reprinted in newspapers.” The idea was to “soften perceptions and portray the killers as mentally ill.” And, of course, prejudice the judge to be predisposed toward leniency.

Throughout the trial, Darrow pointed the finger of responsibility for Bobby’s murder at everyone but his own clients. He even blamed his clients’ parents for their wealth and the material advantages it provided. In his closing argument, he said, “Too much, too great opportunity and advantage given to a child has its misfortunes” and “I say to you seriously that the parents of Dickie Loeb are more responsible than he.”

The authors tell us that the closest Darrow came to imputing any blame to his clients was to blame their endocrine systems. His experts backed him up, echoing “Darrow’s view that endocrinology explained mental illness and influenced criminal tendencies.”

The authors reserve some of their harshest criticism for Darrow’s three-day closing argument, even though it is the stuff of legend. However, they say the legend is more myth than truth:

“Darrow’s actual closing was disorganized, jumping back and forth from one subject to the next, dangling arguments and then neglecting to follow up on them. In his stream-of-consciousness rambles, Darrow repeatedly interrupted his own narrative, reiterated the same points multiple times, and left many in the courtroom confused.”

As W. C. Fields once said, “If you can’t dazzle them with brilliance, baffle them with . . .” Well, you get the point. And besides, it worked; Leopold and Loeb escaped the death penalty, receiving the aforementioned life sentences, plus 99 years for the kidnapping.

Nothing but the Night is a fascinating retelling of an intriguing chapter in American legal history, which the authors argue, convincingly, “remains relevant today, encompassing as it did so many issues still in headlines: the death penalty; mental illness; anti-Semitism; homophobia; and the corrupting influence of money on the justice system.”

But relevant though it may be, unfortunately, it appears that we, as a society, still haven’t learned some of those hard-taught lessons from nearly a century ago.