The Not Yet Fallen World: New and Selected Poems 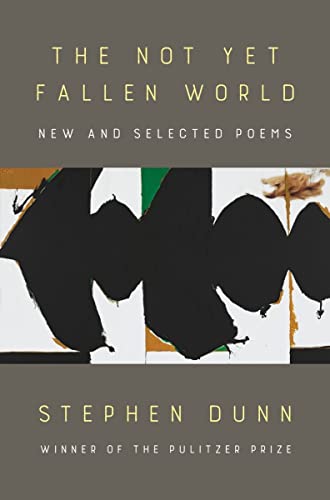 There’s something magical about the number 13: there are 13 stripes on the American flag, 13 is a prime and therefore indivisible number, in the Jewish calendar a leap year has 13 months and Steven Dunn’s new book, The Not Yet Fallen World, is presented in 13 parts. Dunn, the Pulitzer Prize winning author of 19 previous full-length poetry collections, was a master of conjuring language and this final collection of his, featuring selected works from all 19 of his previous volumes and including nine new poems, is a hefty tome that provides readers with a balanced look at just what a poet of Dunn’s skill and experience can bring to the world with concentrated and talented effort.

“Anyone who begins a sentence with, ‘In all honesty . . .’ / is about to tell a lie. Anyone who says, ‘This is how I feel’ / had better love form more than disclosure,” Dunn begins in his opening poem, “Propositions,” and with these brushstrokes, the masterful telling and the complexity, the simplicity and the sagacious wit begin. Even with these first lines of this collection’s first poem, the reader will see a flash of light, a puff of smoke and voila! Stephen Dunn appears like an image on a 19th century tintype: not pretentious or overstated but simply real. Any poet could learn from Dunn and countless poets have benefited from his deft pen in his 60-year career.

“If you say, ‘You’re ugly’ to an ugly person,” Dunn continues, “—no credit / for honesty, which must always be a discovery, an act / that qualifies as an achievement. If you persist / you’re just a cruel bastard, a pig without a mirror . . .” Without any other entrée, Dunn has, in the space of just two stanzas, done something akin to planting the flag on Iwo Jima in WWII. The poem showcases the mastery of the poet, and that, all well-contained within one page. There is a reason why Dunn has been published again and again and again. Future poets, take note: Stephen Dunn is the real deal.

Rita Dove, a former United States Poet Laureate, calls Dunn, “A poet who time and again achieves that most difficult magic of the ordinary,” and that mark falls fast and close to the centerline. Look at his poem, “The Sudden Light and the Trees”:

“My neighbor was a biker, a pusher, a dog

In bad dreams I killed him

and once, in the consequential light of day,

I called the Humane Society

about Blue, his dog. They took her away

and I readied myself, a baseball bat

That night, I heard his wife scream

and I couldn’t help it, that pathetic

relief; her again, not me.

It would be years before I’d understand

why victims cling and forgive. I plugged in

the Sleep-Sound and it crashed

One afternoon I found him

a pistol in his hand, waiting,

he said, for me. A sparrow had gotten in

to our common basement.

Could he have permission

to shoot it? The bullets, he explained,

I said I’d catch it, wait, give me

a few minutes and, clear-eyed, brilliantly

afraid, I trapped it

with a pillow. I remember how it felt

when I got it in my hand, and how it burst

when I took it outside, a strength

that must have come out of hopelessness

and the sudden light

and the trees. And I remember

the way he slapped the gun against

kept slapping it, and wouldn’t speak.”

Dunn has mastered the use of space in the poem, teasing the effect of moments with his line breaks, punctuation and its absence, using the space between breaths to take his words to the heights one might peer over with reticence for fear of falling. It is uncanny that in his choice of subjects, Dunn manages to tease out every fiber that needs discovering. And the magic of that is the stories, though firmly established in their place and time, repeat—in every time. Look at “Five Roses in the Morning”:

“On TV the showbiz of war,

so I turn it off

wishing I could turn it off,

and glance at the five white roses

in front of the mirror on the mantel,

That they were purchased out of love

and are not bloody red

the roses numbered six, but she chose

to wear one in her hair,

and she was more beautiful

because she believed she was.

It changed the night a little.

See how Dunn has packed the poet’s point of view: the rumors of war, the lead up to war and ultimate invasion of Iraq in 2003, presented from the TV lens of “the showbiz of war.” Once packaged, the poem rivets with its foresight into today: the press, audio and visuals of the Russian lead up to the invasion of Ukraine, their storyline to justify invasion and their attack on the humanity of Ukraine—all televised and available for everyday digestion in large or small doses, yet able to be turned off. And the world—at least the Western version, can still click away and focus on the roses on the mantle, their own effect magnified by a mirror, the view of which “changed the night a little. / For us, I mean.” If Dunn had a crystal ball, he couldn’t have hit the distant future any more accurately, and this is just a whiff of the “magic of the ordinary” that Rita Dove referenced.

It teeters on awe-inspiring, holding the substantive book that houses the collected poems of The Not Yet Fallen World. With its hard covers and 272 pages, it is a packed foray into Dunn’s

well-crafted work. If Dunn held an oracle in his writing, it would explain the uncanny applicability of past subjects to the present world, and would be a little worrying as to the outlook for this world’s trajectory. Some solace may erupt in that the title alludes to the fact that our world is “Not Yet Fallen,” and hope figures strong in that outlook. “It’s a problem / loving your protagonist too much” he says in his poem, “Story.” But what sets off this collection—and all of Stephen Dunn’s work—is just that overwhelming measure of love he has infused within his work.

Somehow, it is easy to visualize him toiling over each poem like a farmer carefully amending the soil to make each crop a success. We see the labor nestled behind: the spare language, the deliberate lines and relational effect. And this is the stuff. Stephen Dunn will forever be marked as a poet of worth. Reading this collection is like taking one more step to boost our world to a better stance, to love and a lack of war, to cultural fulfillment and raising of the torch of poetry so its light sheds our darkness.