Not Untrue and Not Unkind: A Novel 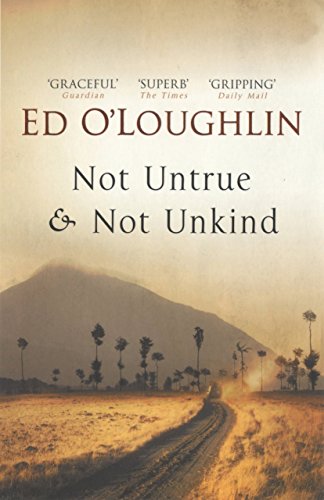 In Dublin, a well-known newspaper editor called Cartwright is found dead, suicide suspected. Cartwright rarely travelled beyond the office—unlike his fearsome reputation that managed to terrify reporters everywhere. Shortly after his death, one of his colleagues, Owen Simmons, discovers a dossier on Cartwright’s desk. In the dossier is a photograph, which brings Simmons back to Africa and to the woman he once loved, as well as to a time when his job was all about principles and ideas.

This is the intriguing beginning of Ed O’Loughlin’s gripping story of friendship, rivalry, and betrayal among a team of cynical, war-weary journalists and photographers covering Africa’s wars in the 1990s, from Zaire to Nigeria, all the way to Rwanda’s land of bloody genocide. It’s a dark and expertly told soap opera, where bloody killing fields come second to even nastier egos.

There is very little nobility on display from any of the characters—not even genocide gets in the way of ambition, vanity, and professional rivalry as they race to file their stories first, beating deadlines and rivals—but this is the strength of the novel: not romanticizing war or those for whom war pays the bills. To the world, the reporters are hard as bricks. Only behind closed doors, when the squad retires to their dodgy hotels and drinking dens, do we see the cracks in the bricks.

The title of O’Loughlin’s book comes aptly from a Philip Larkin poem, “Talking In Bed,” and is filled with characters as cynical as anything that lauded poet created. Yet for all that, it’s an astonishingly powerful and accomplished debut novel written with great authority by a person who has obviously drawn on his experience as a journalist for the Irish Times.

This atmospheric book authentically carries the sounds and flavors of a Graham Greene novel, reading at times like a memoir with the seamless underbelly of a gritty Hemingwayesque tale. One section in the book describes the motley crew descending on a massacred refugee camp. O’Loughlin’s restrained—albeit poignant—prose makes this particular passage very uncomfortable, but compulsive reading, and it will remain in your mind long after you’ve put the book to rest.

The story is told fluently from Simmons’ perspective, and this adds to the urgency as we are plunged into apocalyptic jungles of malevolence filled with bombs, bullets, and all manner of killings.

Long-listed for The Booker Prize, Not Untrue and Not Unkind is not a happily-ever-after book—and for that cold candor, we should be eternally grateful to O’Loughlin. Buy, steal, or borrow this book. Whatever you do, read it.