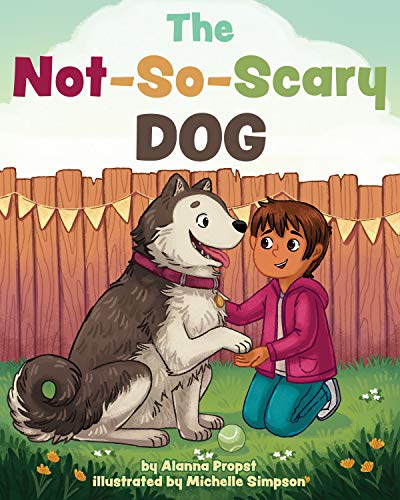 The Not-So-Scary Dog is a book about a boy who is afraid to go to a birthday party because his friend has a big dog. His mom helps him through exposure therapy to overcome his fear of dogs.

“Oh, Tommy, you’ve got mail, it’s from Joey down the street./ An invite to a birthday bash, it sounds like such a treat!”

The story is written in this rhyme scheme throughout, which works most of the time. ”‘What’s wrong?’ she asked, her eyes concerned./ ‘It’s like you’re in a fog.’/‘I can’t go to his birthday, Mom, because he has a dog!’”

“My favorite showed a big dog that was playing with a bunny.” Here the word big does not fit the beat. It would’ve been better to use a two-syllable word in place of big with the first syllable stressed and the second syllable not stressed. The way it reads now, dog is supposed to be the unstressed word, and we just don’t talk that way. The word that is also forced into a stressed position when it really works better as an unstressed word.

It happens often in this couplet. “Exposure means to not avoid the things that causes harm.” This line scans well. “Since getting close is the best way to learn they won’t cause harm.” The stress falls on the word the, and not on the word best. In natural speaking, it would be the other way around.

“And as his curly tail did wag, my heart it settled down.” Again, no one says did wag. They say wagged. The words are forced to fit the beat of the rhyme.

Aside from the occasional forced rhymes, the book works. It shows how the boy overcomes his fear through exposure therapy and is able to attend the party.

The full-color art is adequate, with cartoonish looking people. The pages with white space work the best. There are many types of dogs in the story, all cute. A boy in the park rides in a wheelchair, where he throws a ball to his big dog while the protagonist stands his ground on the swing. The end papers are sage green. The cover is slick with white space behind the title.

Wouldn’t it be petted for past tense?

One of the best couplets is this one: “I went to Joey’s birthday bash without an ounce of dread./ I saw his dog and knew it had been bigger in my head.”

The story is timely with the mom showing the boy videos on her phone.

A two-page Reader’s Note explains more about exposure therapy. It even suggests questions to discuss with your child.

The book will serve its purpose, getting children to learn to tolerate being around dogs, helping them overcome their fear of canines.

Hopefully, next time, all involved in the making of a rhyming book will read the text out loud and listen to the rhythm of the words to find out where there are bumps.