This Is Not My Hat (Caldecott Medal - Winner Title(s)) 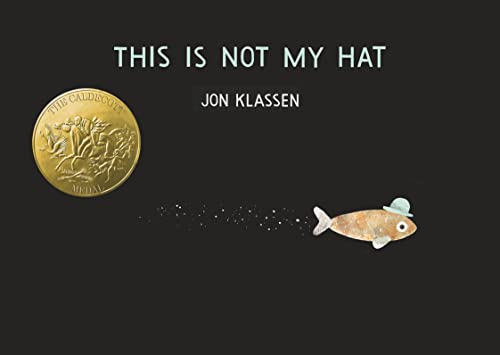 “for a little board book, This Is Not My Hat is a whale of a tale.”

What to say about a board book that uses such sparing prose that any review will be longer than the book? The newest edition of This Is Not My Hat updates Jon Klassen’s 2013 Caldecott Medal-winning picture book to board book format. It’s a natural fit. The story is so simple and compact, it lends itself to the limitations of the board book style.

From its opening lines—“This hat is not mine. I just stole it.”—Klassen’s tale establishes suspense. The narrator, a small fish in a bowler hat, took the topper from a bigger fish that was sleeping. Early on, we realize we’re listening to an amoral narrator who’s not as smart as he thinks he is. This is driven home by the illustrated spread featuring a wide-awake big fish under the line, “And he probably won’t wake up for a long time.”

The story continues as the clueless little fish says, “And even if he does notice that it’s gone, he probably won’t know it was me who took it.” From the expression on the big fish’s face, the reader is absolutely certain he knows who took it. This interplay between words and images continues throughout, and the reader can only understand the story by weighing one against the other.

Klassen’s illustrations are a delight, telling a story that the narrator isn’t aware of. Working with a limited palette of blacks and browns (plus a gray hat for emphasis), he expresses so much with such minute variations from piece to piece. Each illustration stays mostly in a medium shot, and the characters’ feelings are shown almost entirely through their eye movements. And yet the whole thing works like a charm.

By the ambiguous ending, when the little fish tries to hide in some seagrass and a crab shows the bigger fish where he’s hiding, the reader will be left to draw their own conclusions. But one thing’s for sure: for a little board book, This Is Not My Hat is a whale of a tale.