Not the Israel My Parents Promised Me 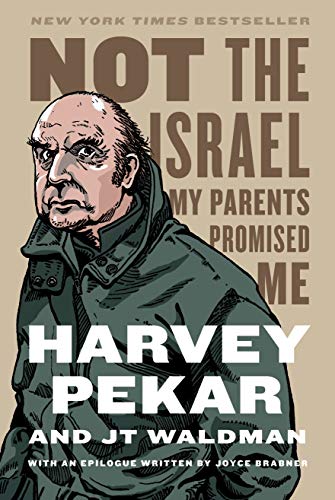 “Harvey Pekar understood he was part of an imperfect world, and his writing reflects this knowledge.”

The late Harvey Pekar was fearless in his approach to a story. From his first autobiographical work in the self-published comic book American Splendor in 1975, to the work now being published after his death, he never flinched when it came to what he had to say. The one continuing thread in his writing is he told the truth as he saw it, and he told it as well as he could.

If he was an idiot in a situation, he admitted as much. If he was correct, he never backed down. If he was conflicted, he let the reader know there may not be a correct answer. He was also adept at viewing a situation inside a larger context.

Harvey Pekar understood he was part of an imperfect world, and his writing reflects this knowledge.

His work on American Splendor is one of the changing points in comic history. In an industry and art form essentially dominated at the time by men in capes, confused teenagers with unreal abilities performing insane heroics, Mr. Pekar wrote about not liking the other file clerk at work or complained about screwing himself out of a great deal because he was greedy. He saw comics as an art form having the ability to move beyond the established limitations, reflecting the world around him.

These seemingly mundane stories were illustrated by some of the greatest comic artists of the time. His rapport with the artists and their own sensitivity to what Pekar wrote came through in the work that was published. Robert Crumb, Spain Rodriquez, Joe Sacco, Rick Geary, and many others brought the man to life on the printed page.

Written and developed prior to his passing, Not the Israel My Parents Promised Me shares an author credit between Mr. Pekar and his illustrator J. T. Waldman. In fact Mr. Waldman is as central to the story as author Pekar is. Traveling together through a single day, Mr. Pekar is looking to better understand what has become of the country of Israel, and Mr. Waldman is a knowledgeable, experienced, and strong foil for his thoughts.

To do this they weave a clear and simplified history of Judaism itself through the earlier portion of the book. As the discussion between the men moves closer to present day Israel, Mr. Pekar’s own discomfort begins to move closer to center stage.

What Mr. Pekar believes is not going to make some people happy. What they may not be able to admit is that Mr. Pekar argues his case clearly and with a deep respect for both sides. Despite his self-admitted failings, Mr. Pekar’s knowledge that he is part of something bigger and that we have a deep humanistic obligation to each other never leaves him.

He tells us how his original feelings about his own Jewish heritage were formed and how his parents held certain opposing viewpoints regarding their shared religion, but they still lived together as a couple. His struggle in Hebrew school culminates with his being kicked out and fearful of what he caused to happen. His life unfolds before us in a parallel storyline to that of the Jewish people.

Mr. Waldman, who helped write the book, is also the artist. His work is a perfect example of the best a skilled artist can bring to a writer’s work inside the graphic novel format. Shifting artistic styles as the narrative itself shifts across time he creates moods and adds definition to each part of Mr. Pekar’s landscape.

When interacting directly with Mr. Pekar Mr. Waldman keeps the action sharp and clear. When the narrative shifts he moves the reader with it by adjusting the way he portrays the action. As Mr. Pekar describes his mother‘s political beliefs artist Waldman’s cuts in and out of the small things that a child would notice about his parent as they talk.

Throughout the 3,000 years of history Waldman gives each period its own distinct and appropriate style. His imaginative adjustments to any situation show through when he and Harvey head for lunch in his car. Instead of using a regular block panel style, he creates a journey mimicking the curving nature of the roads they travel.

Mr. Waldman’s work throughout the book is like listening to an album where the musician is able to appropriate musical styles from across a wide variety of genres yet bring them into a cohesive and stable piece. Nothing seems like a trick and it all seems to blend so perfectly, each bit adding to your enjoyment of the bigger picture.

Ultimately it is Mr. Pekar who owns the center, warts and all. The arguments are made with logic and grace with an eye toward fairness for all involved. When he talks about modern Israel he doesn’t’ seem happy with the decision he has arrived at, but he does his best to make us understand it.

His comment in the final panel unflinchingly exposes his own shortcomings one last time.

The epilogue as written by his wife Joyce Brabner shows her own great respect for the decisions that he made in life. In a few beautiful pages she sets the reader up for Pekar’s funeral in 2010, revealing their marriage as a partnership.

Not the Israel My Parents Promised Me is a beautiful book for those who are looking to better understand the world they live in and the people that live with them in that world.