Not of This Fold (A Linda Wallheim Mystery) 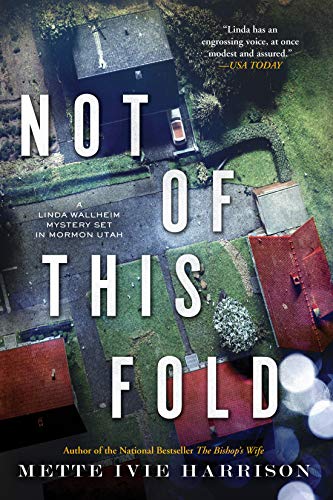 “As always, Harrison’s plotting is tight, her pacing compelling, and her attack on the morality of the Mormon Church sharp-clawed yet heartbreaking.”

Reasons to read any mystery by Mette Ivie Harrison: (1) They’re set within the struggles of active Mormons in Utah (members of the Church of Latter-Day Saints, an all-American historic treasure); (2) They face the grim reality of what death and other crimes do within a close community; (3) The protagonist, amateur sleuth and Mormon bishop’s wife Linda Wallheim, reveals her very vivid agony over the principles of her church, her faith, and her marriage, while drawn to rescuing victims of crime around her.

Not of This Fold is Harrison’s very to-the-moment probe of immigration issues and the treatment of darker skinned members within the church and its gospel, The Book of Mormon. Linda Wallheim tries to set a good example of how a person can question the church and its heritage, yet live within the bounds of faith in God. So at first she defends the gospel she lives with, but her difficult friend Gwen—a more outspoken and angry rebel than Linda—challenges such easy resolution:

“’The idea that Latinos are the descendants of the Lamanites and that we as Mormons have a duty to bring the gospel to them, there’s an inherent superiority and colonialist attitude about it. I see it in the way that Greg Hope interacts with people every Sunday at church. He’s the white guy with the truth. They have to defer to him.’”

Linda can’t deny the situation. And with Gwen, she’s quick to blame Greg Hope, who’s both a Mormon bishop (local congregation leader) and an employer of especially the Latinos in the region with uncertain immigration status. Of course, he’s assisting them in getting proper papers. Or is he?

When the Mexican mom of three small children is murdered, Linda and Gwen realize that their probing of the situation may have enflamed it further. Violating partnerships with their husbands, they struggle to investigate the roots of the crime, and of a local crime wave of breaking and entering that seems oddly parallel to Greg Hope’s security business among prosperous Mormons in the area.

As always, Harrison’s plotting is tight, her pacing compelling, and her attack on the morality of the Mormon Church sharp-clawed yet heartbreaking. As Linda continues to test the resilience of her marriage, her own faith, and her sense of responsibility to women in the area, questions and insights tumble and align. For readers of the Linda Wallheim Mystery Series, this is a must-read book.

On the other hand, those not already hooked by the characters and situation may struggle with Not of This Fold. Linda’s callous disregard of her husband’s concerns and her encouragement of risk for other women don’t make her very likeable. To the extent that a powerful mystery series shows hard-earned growth in the protagonist, Harrison is missing the magic ingredient this time around—Linda treats her husband poorly in many ways, similarly to what she did in the 2017 title in the series, For Time and All Eternities. When her husband Kurt finally demands that she drop her investigation, he says she’s got to listen to him this time:

‘If you don’t, well . . .’ There was only a moment’s hesitation before he said, ‘I’m going to have to call both you and Gwen in for a disciplinary counsel.’

It wasn’t at all what I’d expected, and it made me wonder what was going on in his head. I wished I could be more sympathetic to him, but he was using his position bullying me, and I wasn’t about to put up with that.”

Linda’s attitude toward Kurt eventually robs her of the chance to feel she’s solved the case and rescued someone, which also deprives the book of the satisfaction that a well-solved mystery usually conveys. Add this book to any shelf of Mormon mysteries, Utah settings, or women sleuths—but for maximum pleasure, read Harrison’s early titles first, to catch on to what she’s working to convey.