Not Born Yesterday: The Science of Who We Trust and What We Believe 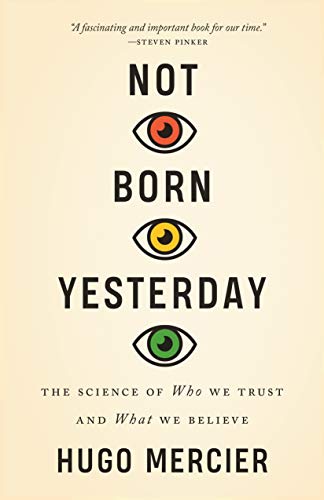 “Whether or not you believe the case made by Mercier that we are not easily hoodwinked, the idea that in today’s world we humans are uniquely equipped to ferret out lies and cons is oddly reassuring.”

Hugo Mercier begins Not Born Yesterday by admitting that the premise of his book—that we’re not as gullible as we’re made out to be—makes him an outlier. He insists that “evolution makes gullibility maladaptive” and that “we are endowed with a suite of cognitive mechanisms that help us decide how much weight to put on what we hear or read.” Replete with historical and global examples of why "influencing people isn’t too easy, but too hard,” the book covers a great deal of ground, including brainwashing, fake news, rumors, conmen, anti-vaxxers, demagogues, and prophets, explaining why all ultimately fail long term.

This subject matter of this book will be of interest to anyone who wonders how to trust what people say and do, especially in the digital, free-for-all age of unfettered, often suspect, information. The breadth and depth of research studies presented by Mercier will be especially appealing to science aficionados.

However, anyone looking for quick and easy answers about whom and what to trust won’t find them between the pages of this book. Non-scientific-minded readers may get so lost in the weeds of the substantial meticulous research Mercier presents that they may lose the thread of what he’s talking about. This problem might have been alleviated by having chapters grouped under section headings, but it’s also possible that such a dense amount of material, much of which is the description of studies, is bound to be difficult for the lay reader.

Mercier’s main argument against gullibility is that, as a universal trait, it fails to foster human survival and is, therefore, not adaptive. Instead, he contends that humans possess “cognitive mechanisms” that allow them to accurately evaluate communicated information and that this is why mass persuasions based on falsehoods ultimately fail and why rumors, conspiracy theories, fake news and supernatural beliefs are always subject to ongoing skeptical challenges. He explains how we strike a balance in assessing truth and lies, saying, “These [open vigilance] mechanisms allow us to accept most beneficial messages—to be open—while rejecting most harmful messages—to be vigilant.”

One major mechanism is plausibility checking, which is used to evaluate communications based on our own belief systems or pre-existing views. Another is reasoning, which tells us about the merit of communications based on what we infer from them, hopefully objectively. The goal is to balance confidence in our pre-existing beliefs with openness to those that challenge them.

Mercier debunks the popular theory that we can be trained to recognize when someone is lying due to their exhibition of unconscious signals or tells which undercut the truth of their presentation. In fact, he asserts that “there are no reliable behavioral cues to lying and deception.” The way of establishing truth, he insists, is by making a critical assessment of who is trying to sell it to us. Useful criteria include a person’s past performance reliability, how they obtained the evidence they’re presenting (it’s most valuable when people report what they’ve seen or heard firsthand), whether or not they have our best interest at heart, their general reputation, and if their interests align with ours.

For those seeking to understand the art of persuasion as it relates to political science, history, and psychology, Mercier’s final chapters offer insights into why we succumb or resist seduction by falsehoods. Again and again, he makes the point that people are drawn to certain invalid and irrational ways of thinking not because arguments made by others are persuasive but because they were already leaning in the direction of what is being proposed. That is, people do not generally suddenly flip their viewpoint on a subject because a better argument is presented to them. Mercier’s more reasonable explanation is that they already are open to views which support or reinforce their own belief system.

On a bright note related to our nation’s current political tug of war, Mercier maintains that society is not as polarized as we’ve been led to think. He presents the argument that polarization is driven by “the heavy consumption of online media,” and denies that our views are innately divergent or as oppositional as they would be without such extensive absorption. Whether or not you believe the case made by Mercier that we are not easily hoodwinked, the idea that in today’s world we humans are uniquely equipped to ferret out lies and cons is oddly reassuring.