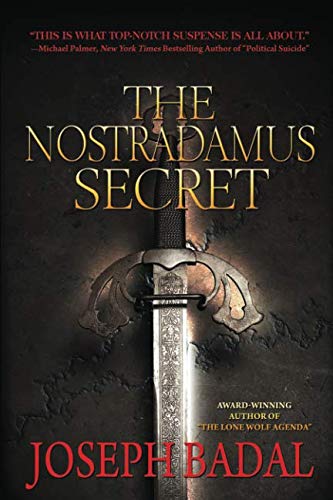 “. . . [the novel] is entirely a contemporary novel of geopolitical machinations that risks a hint of jingoism.”

The Nostradamus Secret is the latest historical thriller in Joseph Badal’s Bob Danforth series. The plot is built upon the premise that Nostradamus’s “lost” 58 quatrains prophesy the rise to world domination by a wealthy Iranian megalomaniac, Naimzadeh.

The book begins with a prologue set in 16th century France to set the scene for the transportation of the quatrains to Iran, then switches to present day. The conflict arises out of Naimzadeh’s need to squash the only thing that stands in his way—the U.S.A.

Mr. Badal’s unquestionable knowledge of the U.S. military and the workings of its security services is evident in this complex thriller, and he has certainly done his homework on the historical references; however, while the Nostradamus link provides a good title, it fails to enrich the plot as much as it promises.

In this book, Bob Danforth is brought out of retirement to return to the CIA to head the investigation into a series of high profile assassinations across the country. Yet, for all Danforth’s expertise, the reader makes the connection between the shootings long before the experienced CIA agent and is left wondering if this is the reason why Osama Bin Laden avoided capture for so long.

Danforth’s family, too, is dragged into the international conflict. His son leads a crack team to Iran where they are detailed to nurse Naimzadeh who has so far hoodwinked the U.S. into backing him for the Iranian presidency. Back at home, Danforth’s wife morphs into a Lara Croft figure just at the right moment to prevent familial disaster. Somehow, the underlying complexity of the plot never quite breaks through.

Once the U.S. realizes that the assassinations are a way of destabilzing the country, and that Naimzadeh is behind them, an all-out invasion of Iran follows with the intention of establishing democratic rule under a puppet president. Sound familiar?

There is no doubt that Mr. Badal has written a page turner for lovers of action-packed political thrillers but it is let down by two things: Swaths of uninspiring writing with speech tags that are more aggressive than the Revolutionary Guard, and the almost brushing aside of the final conflict in a couple of paragraphs.

Whether or not The Nostradamus Secret succeeds as an historical thriller remains to be seen; other than the reference to Nostradamus it is entirely a contemporary novel of geopolitical machinations that risks a hint of jingoism.