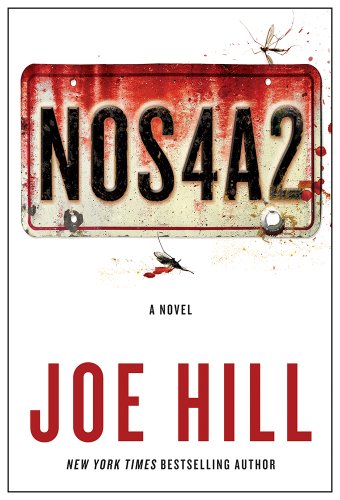 Make sure you clunk-click into your seatbelt before cracking open Joe Hill’s super high-octane new novel NOS4A2. For this is a book full of full throttle, pedal-to-the-metal vroooom. It’s horror fiction revved up to the max.

In the dedication—to his mother—Joe Hill calls this book a “mean machine.” And he’s right. This is his Christine or his From a Buick 8—only it’s better. It’s a ’roided-up K.I.T.T from Knight Rider gone off reservation.

Joe Hill’s Rolls Royce Wraith—with its plate: “En-o-ess-four-a-two. It’s a vanity plate. Spells a German word. Nosferatu.”—is the undoubted star of this piece. It is a vehicle that seems to act “with a mind of its own.” The body of it “gleamed like a torpedo” and it “held the road like a panzer.” It is a work of art, the Mona Lisa:

“The Wraith slid out of the mist, a black sleigh tearing through a cloud and dragging tails of December frost behind it. December frost in July. The rolling white smoke boiled away from the license plate, old, dented, rust-shot: NOS4A2.”

But NOS4A2 is more than just a car’s-the-star novel. The car, “beautiful bitch” though it is, is merely—ahem—a vehicle, a metaphor through which author Hill can explore what he terms as the “United Inscapes of America,” a nightmare dreamscape just beyond the world as we know it. As one of the characters puts it:

“Sooner or later a black car came for everyone. It came and took you away from your loved ones, and you never got to go back.”

The car is a bridge, a loophole. It is used to cross between worlds. “This old car can slip right out of the everyday world and onto the secret roads of thought. Sleep is just the exit ramp. When a passenger dozes off, the Wraith leaves whatever road it was on and slides onto the St. Nick Parkway.”

St. Nick Parkway is in a place named Christmasland, a “place of pure dream.” “With all due respect to Mr. Disney, Christmasland is the true happiest place in the world.

Although—from another point of view, I suppose you could say it is the happiest place not in the world. In Christmasland every day is Christmas, and the children there never feel anything like unhappiness! There is only fun. It is like heaven—only of course they are not dead! They live forever, remain children for eternity, and are never forced to struggle and sweat and demean themselves like us poor adults.”

Only with all due respect to Roy Wood and Wizzard, in Christmasland Hill shows the true horror of the song “I Wish it Could Be Christmas Every Day.” If you’ve ever worked in a store, or restaurant, or bar—where the Christmas songs start around September 1st and get tired around September 2nd, by September 3rd they’re akin to a steady drip-drip method of torture—then you’ll know what I mean.

Living in a state of pure, innocent indulgence is not very innocent at all. Christmasland might be “better than going to Hogwarts Academy, or Willy Wonka’s Chocolate Factory, or the Cloud City in Star Wars, or Rivendell in Lord of the Rings,” but it is also a place of living death calling to mind the lost boys of Peter Pan.

From the cracking opening line—“Nurse Thornton dropped into the long-term-care ward a little before eight with a hot bag of blood for Charlie Manx”—to the emotional conclusion some 700+ pages later, this is a riproaring, white-knuckling ride.

Mr. Hill prefaces the novel with a quote from Gottfried Burger’s Lenore, “For the dead travel fast.” That they do in NOS4A2. They travel across geographical borders, from outer- to innerscapes . . .

The dead travel quick as magic.

And their driver is one Charlie Manx, he of the hot blood, he of the name which is almost, but not quite, a dead ringer for that icon of American pop cultural infamy, Charlie Manson.

Manx bears some startling similarities with a recurring Stephen King antagonist—Randall Flagg—who appears in a number of King titles, not least The Stand. King wrote of Flagg that he was a walker of roads that “came out of nowhere.” Same with Manx. Manx also has the power to blacktop the clouds of his twisted imagination.

Charlie Manx “was hideous-old, not to mention hideous. His great bald skull was a globe mapping an alien moon, continents marked by liver spots and bruise-colored sarcomas. Of all the men in the long-term-care ward—aka the Vegetable Patch—there was something particularly awful about Charlie Manx with his eyes open at this time of year. Manx liked children. He’d made dozens of them disappear back in the nineties. He had a house below the Flatirons where he did what he liked with them and killed them and hung Christmas ornaments in their memory. The papers called the place the Sleigh House. Ho, ho, ho.”

The Wraith is an extension of Manx’s desires. “I have my Wraith, and when I am behind the wheel of this car, I can find my way onto the secret roads that lead to Christmasland. I have known others who use totems of their own to turn reality inside out. To reshape it like the soft clay it is . . .”

One such “other” is Victoria McQueen—aka “The Brat” aka Vic. Vic has an uncanny knack for finding lost things. Her “totem” is her bicycle, and when she rides it over The Shorter Way Bridge in Haverhill, Massachusetts, it can take her anyplace she needs to be: to Terry’s Primo Subs, Hampton Beach, New Hampshire, or to Here, Iowa, or to Gunbarrel, Colorado, in little over a few seconds, riding only her Raleigh Tuff Burner. And sure she was pedaling fast, but not that fast.

“She had day-dreamed a hole in the world and ridden her bike through it, and it was crazy. Only a crazy person would imagine that such a thing was possible—except . . .”

NOS4A2 is one massive, 700+–page ride except . . . It explores Vic’s life as she grows older, as the bridge starts to take its toll on her—because all bridges of the imagination have trolls, and many of them have trolls (Manx) lurking underneath them.

We stay with her as she graduates from a bicycle to a motorbike—and with a name like McQueen, perhaps it was nominative determinism made her end up on a hog—and as she starts a family. As she tries to come to terms with the actual moment her life changed. When she encountered one Charlie Manx in the dreamworld, and became the first child ever to escape his evil clutches.

Mr. Hill is excellent when he describes Vic’s mental disorientation. She tries to convince herself that there never was any Manx, or any bridge:

“These memories come to me, all at once, perfect little chapters in this crazy story I wrote in my imagination. But of course there’s nothing true about them. They’re invented on the spot. My imagination provides them, and some part of me decides to accept them as fact the instant they come to me.”

And: “That’s what I figure out in the mental hospital. My story about the magic bridge is a classic empowerment fantasy. I couldn’t bear the thought pf being a victim, so I invented this vast delusion to make me the hero of the story, complete with a whole set of memories of things that never happened.”

And yet, “In my head there are two stories about what happened to me, and they both seem true.” This is reminiscent of Life of Pi. It explores the stories we tell ourselves, the stories we convince ourselves we must believe because society dictates we should.

But then Manx comes for Vic’s son, Wayne, and she realizes she has to go back to the nightmare dreamscape she thought she’d consigned to a locked-box inside her mind. I don’t want to do Mr. Hill a disservice by continually referencing his father—after all, that’s why Mr. Hill chose not to trade off the family name in his early career—but his creation of the “United Inscapes of America” does bear a number of comparisons.

For example, there are references to Shawshank, and on the map, there’s “a place called PENNYWISE CIRCUS.” And then there’s the whole subject of the loopholes, the bridges. I can’t help but recall one of Mr. Hill’s father’s recent projects—11/22/63—in which the loopholes were temporal, not geographical. But in essence, they were both mental passageways.

Another similarity is in the excellence of the character development. Like King, Mr. Hill has a knack of making you instantly relate to his characters—and I defy anyone not to be rooting for Vic, and especially for Lou Carmody, who almost steals the show. They’re honest, likeable folk. Sure they’re unconventional, but they’re thrust into extremely unconventional situations.

Another thing. I think he gets us with the nostalgia. And bear with me here.

“Even at thirty, if her own son asked her the nicest thing she had ever been given, she would think immediately of the Day-Glo blue Raleigh Tuff Burner with banana yellow rims and fat tires. It was her favorite thing she owned, better than her Magic 8 Ball, her KISS Colorforms set, even her ColecoVision.”

A little later on, he references: “her Tinker Bell mobile and the Lite-Bright board . . .”

Joe Hill, like his father King, shows a flair for capturing a kind of rose-tinted everyman youth.

And so you might think NOS4A2 reads like a novel from the glory days of horror. But Joe Hill is definitely not old-fashioned. The writing’s sprinkled with magic, like the best of Gaiman. And it’s a bonafide page-turner like the best of Stephen King’s more recent work.

Joe Hill is building a reputation all his own, and it is to his credit now that the only reason I have mentioned Stephen King at all in this review is because King is such a master of the genre. Sure, their writing styles contain a lot of similarities, but I don’t believe this is because they are related.

This mean machine of a novel deserves to stand on its own tires—an instant classic.