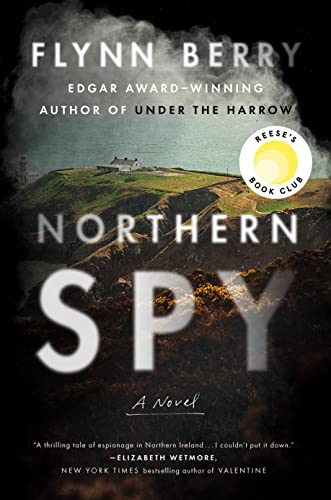 Unashamedly focused on loving and savoring her six-month-old son Finn while also working as a news producer, Tessa Daly can’t believe it when the police claim her sister Marian has joined the IRA. Though the enduring aftermath of the Troubles marks every day for Tessa, her mother, her child, and yes, her sister, it’s impossible that their lives in Northern Ireland could become militarized and criminalized in this way.

Until, somehow, it isn’t. Whether her sister’s a sort of hero for fighting against the government forces, or somehow playing a “doubles” game to move both sides toward peace, Tessa needs to know which choices are right and necessary. And whatever her own position becomes, she’s got to protect her baby first, and Marian second.

Author Flynn Berry landed major awards for her two earlier thrillers, and Northern Spy merits more of the same. Taut and passionate, it’s a plot-driven and morally demanding narrative full of threat and heartbreak. The fiercely portrayed reality of life in a divided land and the costly choices everyone faces make this into a page-turner. Berry also excels at keeping her protagonists smart and even wise—so when things do go wrong, it’s not because of foolish mistakes.

Most importantly Tessa holds her focus:

“I don’t want my son to have to forgive me for anything, but I can’t even tell what that might be, so how can I avoid it? . . . I want someone to tell me what to do. If we can stay or if we need to leave tonight, right away, the sooner the better.”

By staying in place, and maintaining loyalty to her family, Tessa’s soon a person of interest herself. The detective chasing the terrorists makes that clear: “He shakes his keys in his suit pocket, then fixes his gaze on me. ‘Tessa, what does nitrobenzene smell like?’ I blink at him. ‘I have no idea.’ Fenton considers me for a few long moments, the turns to go. He knows I’ve just lied. Nitrobenzene smells like marzipan.”

Northern Spy will be a hit for readers of Dublin noir and tartan noir, as well as those who’ve already discovered Stuart Neville’s Belfast noir with its grit and darkness. But because Berry opts to view the pain and violence through a young mother’s eyes, there’s less in-your-face blood and guts, and perhaps more agony in spite of that. Denise Mina and Tana French readers can also find familiar ground—but so in fact can any readers who treasure a well-plotted mystery with a powerful sense of how place and the near past can force a person to cross the lines they once felt were sacred.