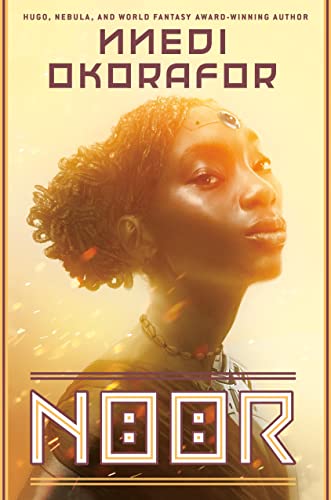 Nnedi Okorafor has an established reputation as a science fiction novelist and as a leading Africanfuturist. Her newest novel, Noor, offers a doorway to both genres for those who might not be familiar with either genre.

The novel’s protagonist, AO, is a working-class cyborg woman living in Abuja, Nigeria, in the not-too-distant future. Her mechanical work is a natural extension of her body’s heavy enhancement. Both legs and one of her arms are mechanical, ameliorating the disabilities with which AO was born. The mental enhancements and brain implants are of more recent vintage, but they’re essential parts of her. Though legally she’s Anwuli Okwidili, AO prefers to name herself Autobionic Organism.

AO might be comfortable with her cyborg identity, but those around her aren’t: “by definition, to many Nigerians, I was trouble. Even in Abuja, though it wasn’t as rabid as in the south, I was a demon. A witch. An abomination. Priests, reverends, bishops, pastors and imams, holy men all over West Africa said so. . . . [Cyborgs] were supposed to die; what we were doing instead of dying wasn’t living.” Her body becomes a site of enormous conflict, not because of her gender but because of her technological autonomy. When that conflict explodes into violence, AO winds up fleeing into rural northern Nigeria toward the massive Red Eye dust storm that generates so much wind power, yet renders its territory uninhabitable to all but the most determined.

She joins a Fulani herdsman whose cattle have almost all been lost to violence: “My name is Dangote Nuhu Adamu. I’m a man of tradition, a son of the sand, I’m fully human.” Yet in spite of that traditionality, he goes by an acronym, too: DNA. DNA is mistaken for a terrorist; his companions and nearly all his steer are killed. Like AO, he becomes a fugitive, accused of violence that he has no part of, and which is part of a larger power shift within their culture.

Noor makes elegant use of the tensions of Nigerian society in balance with those of global capitalism. Even a wandering herdsman carries a cell phone and an anti-aejej, a machine to alleviate the force of dust storms. Refugees from cultural and technological violence find themselves trapped between human and environmental forces, seeking safety for themselves and their families but unable (at least at first) to perceive the scale of the problems they face, and the corporation at the root of so many of them.

Ultimate Corp pervades this novel and serves as its weakest point. The name is conspicuous, as overt a signal of evil as the Umbrella Corp of Resident Evil. By making this single entity responsible for such a wide range of problems, Okorafor renders corporate malfeasance coherent for tentative readers, but avoids the complexities of late capitalist violence in ways likely to frustrate those already familiar with these concerns.

Okorafor’s novel is deliberately accessible. Its readers need no background in science fiction tropes or technological concepts. In Okorafor’s hands, Nigeria is as legible as America. The resulting narrative is briefer and perhaps less complicated than experienced readers might wish. The world she’s created is enormously intriguing, filled with solarpunk technology (that is, technologies imagining clean energy and a sustainable future) in an African context that could sustain a larger plot. AO and DNA both have complex inner lives that could be further explored.

Noor isn’t strong enough to be a classic of its genre, but it’s a beautiful entry-point for those seeking one, and its accessibility reinforces its value and charm. Readers left wanting more can hope that Okorafor will develop this setting further in works still to come.