A Noise Downstairs: A Novel 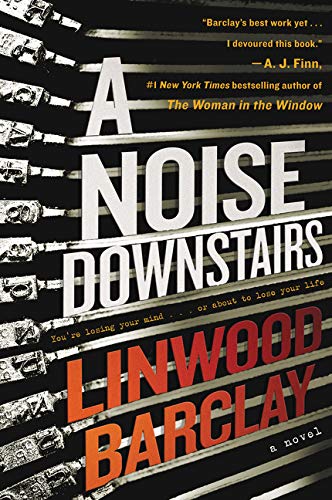 “A Noise Downstairs is a terrific edge-of-your-seat Hitckcockian psychological thriller . . .”

Driving along the Post Road in Milford, Connecticut, late one night in early October, college professor Paul Davis believes the battered Volvo station wagon being driven erratically in front of him belongs to his friend and mentor Kenneth Hoffman, a respected math and physics professor from West Haven College. The car is practically a trademark of Kenneth’s in the college.

Believing Kenneth could be drunk, or possibly over-tired, Paul decides to follow Kenneth, in the hope of flagging him down before an eager-beaver cop pulls him over and hands him a ticket. To add to that probability, the car also has a busted taillight.

However, Kenneth, rather than being thankful, is quite testy, practically accusing Paul of following him. Paul is taken aback by the man’s attitude and decides it’s time to get back on the road. That’s when Paul spots a couple of items he wishes he hadn’t:

“Something in the back of the Volvo had caught his eye. Between the headlights of his car, and the Volvo’s dome light, it was possible to see what looked like mounds of clear plastic sheeting bunched up above the bottom of the tailgate window.”

That something turns out to be two bodies, and Kenneth quickly rewards Paul for his curiosity with a shovel to the head. Everything goes black. And a millisecond before that blackness swallows Paul, his last thoughts possible were: I’m going to be body number three. . . .

Luckily for Paul, that eager-beaver cop he was trying to avoid has spotted the broken taillight and decided to follow up on it.

Paul now finds himself battling PTSD, depression, and severe problems at work, suffered since the traumatic event. Words and deeds he carried out the day before, become lost to him in a fog, making him fear he is slowly losing his mind.

His wife, Charlotte, desperate to cheer him up, brings home a vintage typewriter—a classic Underwood—complete with ink ribbons and heavy round keys, to encourage him to get started on that novel he’s always intended to write.

Delighted with the gift, Paul decides that he will write, and what better subject to write about than serial killer Kenneth Hoffman. In writing, Paul hopes to find the pieces of the jigsaw that seem to be missing from his life since that hellish night. He also believes it will be cathartic for him.

However, the typewriter itself soon becomes another unwanted problem he has to deal with. Paul swears it’s possessed and types by itself at night. But it seems only Paul can hear the ghostly noise coming from downstairs: Chit chit. Chit chitChit chit chit. To add to his woes, Charlotte apparently doesn’t hear a thing, and she soon begins to worry Paul’s going off the rails.

Is Paul losing his mind? Or is something really there—something even more sinister?

There’s only one way to learn if the noises are real or a figment of his overactive imagination. One night, Paul rolls a sheet of paper into the machine. The next morning, when he checks the page, there is a chilling message:

“We typed our apologies like he asked but he killed us anyway.”

He is soon convinced that the typewriter is somehow connected to the murderer he discovered nearly a year ago. The killer Hoffman—now known as the Apology Killer—had made his victims type apologies to him before ending their lives. Has another sick twist of fate entwined his life with the killer? Could this be the same machine that death and murder was typed with?

Increasingly tormented but determined to discover the truth and confront his nightmares, Paul begins investigating the deaths himself. But that may not be the best solution as he finds the closer he gets to the truth, the closer to the nightmare he gets. Soon, the real nightmare begins. . . .

Author Barclay leaves plenty of little trails of breadcrumbs and red herrings for the reader to snack on while digesting the clues he has masterfully planted along the way. The first genuine must-read of the summer, A Noise Downstairs is a terrific edge-of-your-seat Hitckcockian psychological thriller, that lives up to all the hype garnered.