Nobody's Normal: How Culture Created the Stigma of Mental Illness 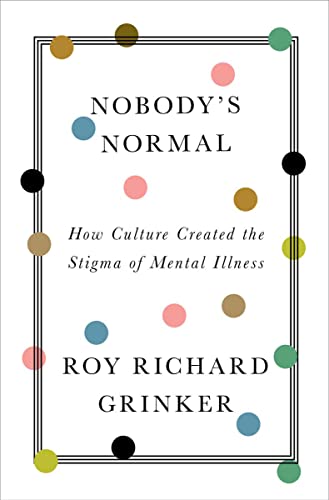 “The author knows that ‘to erase stigma, all of us—those in the medical community as well as laypeople—need to be less judgmental about mental illness in ourselves and in others and learn to manage it with compassion.’”

Roy Richard Grinker, a professor of anthropology and internal affairs at George Washington University, has written a book about mental illness that is both personal and highly professional. His passion to remedy what stigma has done to those with mental illness comes through on every page and is due in part to his having a daughter who has autism and to his lineage—his father and grandfather were psychiatrists and his great-grandfather was a neurologist and psychoanalyst. As the author says, “I was raised in a family that believed everyone had a little mental illness, that emotional pain was a normal part of life, and that mental illnesses existed within a hierarchy of all diseases.”

Unfortunately, this compassionate view is at odds with what is occurring in this culture where “60% of people with a mental illness in the United States still receive no mental health treatment,” the mortality rate for Anorexia nervosa is 10 percent, and suicide is the third leading cause of death among teenagers. To explain this paradox, Grinker points the finger at stigma.

He insists that “Stigma isn’t in our biology; it’s in our culture,” one which has “made psychiatric conditions frightening and shameful, a double illness: first, the ailment itself, and second, society’s negative judgment.” The book describes how this double whammy is woven into our culture and how we can improve assessment and treatment of mental illness as well as learn to take an unbiased view of those who suffer from it. This process begins by understanding that for them, stigma is the biggest barrier to treatment, an international “public health crisis.”

Grinker goes on to describe how stigma defines a person’s identity by their illness. Psychiatric symptoms are not something they have, such as schizophrenia, but something they are, a schizophrenic, which leads to people thinking of them as less than, invisible, and to blame for their mental difficulties. This view reduces them to their illness and leads to branding and excluding them from the norms of society which only worsens their situation.

The book is divided into three parts: Capitalism, Wars, and Body Mind. In part one, Grinker maintains that capitalism plays a significant role in shaping our negative views because it seeks out and rewards the model modern worker: “the autonomous, self-reliant individual.” This ideal works against people who are not typical producers in the economic sense and need, rather than generate, resources. This view led to confining people with mental illness in asylums under  inhuman conditions where the primary psychiatric approach was to classify and regulate them rather than treat them as struggling human beings.

In part two, Grinker describes how the war years in this country affected our view of mental illness, including those on gender and race. Blacks were perceived as unfit for society and, according to the author, “The tradition of preferentially diagnosing depression and other conditions as schizophrenia in African American men is still alive today.” Women were seen as nervous hysterics.

Being shell shocked was viewed as more of a physical than a mental plight, a conversion disorder due to weakness and deception. Fortunately, our view of wounded soldiers has changed and the author devotes a chapter to the diagnosis of Post-traumatic Stress Disorder. One of the major points made in it is that a person’s pre-morbid mental health status often dictates their ability to manage and overcome PTSD.

We also learn about the founding of the National Institute of Mental Health and the creation of the Diagnostic Statistical Manual and follow its modifications over the decades, including how culture plays a role in what diagnoses are added and removed. Grinker also explains how homosexuality was viewed before and after being classified as a mental illness, and how Alfred Kinsey’s bestseller, Sexual Behavior in the Human Male, radically transformed our views of sexual normality. Grinker details how “cures” such as anti-depressants, lobotomies, and electroconvulsive therapy evolved and how they changed our view of treatment for better and worse, depending on the approach taken.

In part three, he covers the tragic aftermath of deinstitutionalization of patients in mental facilities, leaving them homeless, jobless, and treatment-less and how people with disabilities are regarded as less valuable than more abled people in our culture. He writes about the emergence of diagnosis such as Attention Deficit Hyperactivity Disorder, eating disorders, substance abuse, and autism, and describes how stigma is hardest on those who suffer mentally but lack a concrete diagnosis.

The last section of the book provides hope for change. Grinker details how it is happening in companies which have started hiring the disabled, offering more flexible schedules, and refashioning work to accommodate differently abled employees through jobs and improving the workplace. He seeks a world where we focus on dignity and opportunity for people with mental illness and use vocabulary which supports their personhood rather than focuses on their deficits.

Throughout the book, Grinker looks to other cultures to see how they handle mental illness differently and better than we do in the U.S. The author knows that “to erase stigma, all of us—those in the medical community as well as laypeople—need to be less judgmental about mental illness in ourselves and in others and learn to manage it with compassion.” He ends the book with this thought, “If culture put stigma and mental illness together, culture can surely begin to take them apart.”