Nobody Will Tell You This But Me: A true (as told to me) story 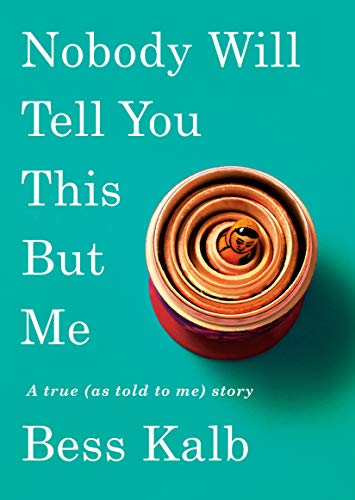 “When the earth is cracking behind your feet and it feels like the whole world is going to swallow you up, you put one foot in front of the other and you keep going. You go forward.”

“When the earth is cracking behind your feet and it feels like the whole world is going to swallow you up, you put one foot in front of the other and you keep going. You go forward.”

This quote, which was often included throughout this memoir, was first uttered by the protagonist’s (Barbara “Bobby” Otis Bell’s) zayde, or grandfather, whenever anyone in the family encountered an obstacle.

It’s a lovely quote and a nice introduction to the relationship that the author, Bess Kalb, a thirty-something Los Angeles writer, had with her beloved grandmother, Bobby.

This memoir is a quick read written in Bobby’s voice and covers Bobby’s colorful life in minute detail, as told by Kalb, in sweet quips and quotes. “My mother taught me exactly one thing and it’s how to make brisket.” Jewish soul food, yes, but the book is for everyone who ever had—or wished they had—a Jewish grandmother.

It is gleaned from the author’s meticulous documentation of voicemails, photos, postcards, and other cherished memorabilia that Kalb saved over her 30-some years. Oh, and those luxurious jewelry pieces!

Bobby was born poor in 1920s New York City, but higher education was encouraged. She was the daughter of immigrants from Russia who had survived pogroms, and she had four older brothers.

Times were tough during the Depression, but Bobby’s mother, Rose, used to tell her, “If you’re having a rotten day, go buy yourself an ice cream soda and a new hat.” Movies were also encouraged for free air-conditioning.

Bobby met her bashert (destined to be) husband, Hank Bell, during college. That’s a whole other story—their love affair of more than 60 years—and Kalb shines with her rich descriptions of that cherished relationship.

Grandpa Hank eventually reached success in real estate, but not without having to deal with the mob, who threatened Hank. He simply surrendered the keys to his fancy, new red Chevrolet and that was that.

They had homes in New York City, in Martha’s Vineyard, and in Palm Beach, Florida. Some of Bobby’s many words of wisdom regarding a happy married life that Bess was privileged to receive were, “You want to know the secret to a long marriage? Separate bathrooms.”

Grandma Bobby had a nose job. “I looked in the mirror and I saw Russia.” She paid for Kalb’s nose job. “Ha. I held frozen peas on your black-and-blue eyes and the Russia melted out of you.”

Lunches at the Plaza, summers on Martha’s Vineyard, reading all the classic books encouraged, shopping at Neiman Marcus and buying new Chanel lipsticks. A wonderful life, written by the talented Bess Kalb, as told to her by her beloved grandmother Barbara Otis Bell, as if Bobby were still alive to tell her tales all over again.

Nobody Will Tell You This but Me, by Bess Kalb, is a charming memoir to enjoy for a quick beach read, or lately, when quarantined at home.