Nobody Home: Writing, Buddhism, and Living in Places by Gary Snyder 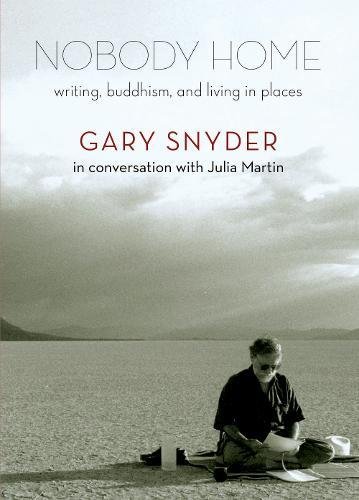 “Julia Martin has done a fine job of bringing Gary Snyder to the fore in her committed study of one of our major contemporary authors.”

This is a healthy and thoughtful collection of interviews and correspondence between two writers of the earth: Pulitzer Prize winning poet and essayist Gary Snyder and South African author and scholar Julia Martin.

Covering the decades from 1980 onward, the two activist thinkers and friends share their visions. Their subjects and themes range from Buddhism, writing, art, ecological and gender politics, issues of community, bioregionalism, and place sense. But it also contains the authors’ musings on family, suffering, age, and death.

Author Julia Martin tells us, “This book puts together three interviews and a selection of letters from around thirty years. During this time many things changed decisively—in our lives, our local environments, and the world—and these changing conditions are the backstory for an evolving dialogue.”

Following a long series of letters begun in 1984 between then graduate student Martin and established author Snyder, living in the Sierra Nevada Mountains of California, the first interview was set up. In 1988 Julia Martin had travelled to Snyder’s home, Kitkitdizze, which also has served as a co-op Zen Buddhist center.

Her questions treat Buddhism, the Goddess mythology of Snyder’s work, and depth ecology, areas that they both feel deeply about. She is probing and Snyder’s responses are thoughtful and full. The section is titled “Coyote Mind.” He provides this answer about placing his work in a tradition: “Part of the actualization of Buddhist ethics is, in a sense, to be a deep ecologist. The actualization of Buddhist insights gives us a Buddhist economics not based on greed but on need, an ethics of adequacy but simplicity, a valuation of personal insight and personal experience over possessions. What I like most about Buddhism really is its fearlessness.”

The second interview takes place in Eugene, Oregon in 2005 and is given the title “The Present Moment Happening.” It broadens some of the previous themes while placing them in the current times of war and terrorism, yet finding a ground in caring and Buddhist practice.

The third interview “Enjoy It While You Can,” moves us back to Kitkitdizze in 2010 and is one of the best for clarifying and declaring the values and intentions of both authors. Note how her questions and comments get longer as she feels closer to the author and more confident of her own views.

At one point where both authors are struggling with their involvements in global issues, Gary Snyder offers this basic advice, “A lot of people in the world have said this: a problem is your problem when it’s on your back, when it’s laid at your door, and you must deal with that. If you can deal with the problems that are right in your front yard, you’re doing all right. So avoid getting excited about abstractions where there are often things that are much more immediate.” Now he is quick to clarify, “And every day we know things that we need to be doing in a larger social level. But it’s still just sweeping the garden.”

At this point, the book shifts into reproducing the letters between these two environmental authors. And in doing so, it backtracks to Martin’s first awkward inquiries of the ”eminent” author. Though his generosity gets them beyond this, coupled with his delight to find a young scholar working on his own writings, the correspondence that follows does not come up to the quality and depth of the interviews.

There are moments of real insight but also lots of mundane telling of daily life. At times it feels like reading someone else’s personal mail. Somehow in the recent Distant Neighbors: The Selected Letters of Wendell Berry & Gary Snyder (Counterpoint Press 2014) they avoid this, perhaps with the sharp editing of Chad Wriglesworth. Nevertheless, Julia Martin has done a fine job of bringing Gary Snyder to the fore in her committed study of one of our major contemporary authors