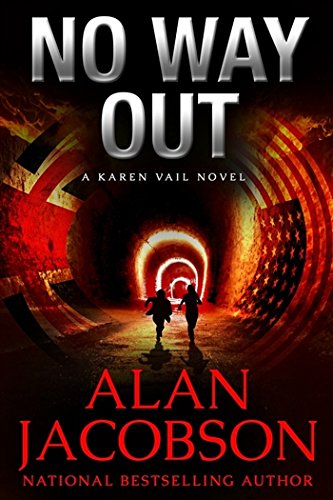 If you are even a teeny tiny, itty bitty bit paranoid, No Way Out will confirm all your worst fears.

With the recent news that our government has been collecting more information on its citizens via phone records, emails, and social networking, one might be tempted to tone down one’s electronic musings. This forfeiture of privacy has been lamented by some and shrugged off by others.

But who is watching the watchers?

Here is a tale of how governments, who are supposed to be hyper security conscious, can be hacked. Because these systems are viewed as failsafe, good people are allowed to do very bad things.

FBI profiler Karen Vail is dispatched to London after a screw-up in Madrid to help Scotland Yard find out who or what set off a bomb that destroys part of a gallery. But this is just not an average hoity toity gallery; the owner has recently purchased a manuscript that may prove, for the first time, to be in Shakespeare’s handwriting—but it may also lend credence to the theory that a glovemaker’s son from Avon did not have the wherewithal to write the magnificent words attributed to him.

This would be a blow not only to English tourism, but to an entire industry built on Shakespeare’s oeuvre, the performance of his work, academic departments, scholarly investigations, etc.
How did anyone find out about the treasure, and what would destroying it do for their cause?

Karen is a likeable character, a smart mouth, fish-out-of-water American in a very English setting. The guv in charge of this case has no use for her, a profiler burned him once, and he doesn’t want anything to do with this very inexact “science.”

Fine, no skin off her nose. She has confidence her profile of the bomber will help, whether the police can use or disregard it. But once she delivers it, all she wants to do is to hop on a plane and go home to her child and partner.

The Shakespeare plotline is abandoned when Karen runs into Hector DeSantos, an old friend who is using another name, and slowly but inexorably, Karen gets involved in a black ops scheme.

Yep, the kind of spy stuff that the US government runs outside of the regular military intelligence protocol—and is usually against the law. The kind where if you know too much they’ll have to kill you.

Turns out, that’s what Hector has been doing, and he knows that London, home to a gazillion surveillance cameras, is a tough place to be a spy.

Profiling serial killers is something Karen is used to doing, but killing people because the government wants plausible deniability? Using truth serum, wigs, and safe houses? Not so much.

Alan Jacobson knows how to write suspense. Things go bad, and then get worse, and when it seems like they can’t get any worse, they do. Karen has claustrophobia and finds herself in small, dark, tight spaces a lot in this novel—adding to the reader’s need to rip through the pages to find out what happens next.

The prose zips the plot along. And the plot is itself compelling—even if it does veer from improbable to damn near impossible.

But what fun to read!