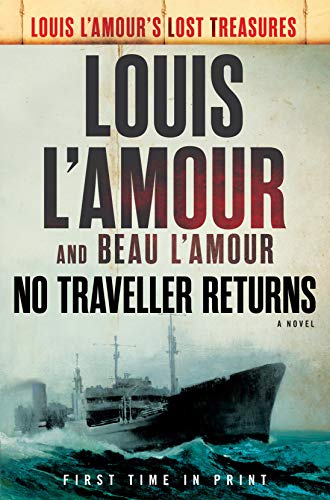 “Louis L’Amour fans and potential fans, hit the bookstores! This is one of his novels not to miss.”

For Louis L’Amour fans, it’s a no-brainer: a new book comes out with his name on the cover, and out they’ll rush to get it. This is impressive, since L’Amour has been gone for 30 years.

But the man was fantastically prolific and left behind raw materials that can be edited into publishable works. His son and estate manager, Beau, is doing just that.

After years of research through his father’s papers and manuscripts and photos, to properly archive them as well as better understand the man, Beau is producing “Louis L’Amour’s Lost Treasures,” of which this volume is the second to be released. Another is in the pipeline for 2019, with more slated to come.

No Traveller Returns is L’Amour’s first completed novel-length work. It was written during WWII and never published—put aside not just because of the war but also because he needed to feed his family. The “pulp” short stories and books he became known for were far more lucrative than literary novels. No Traveller Returns is definitely a literary-style novel.

One would not expect so, given that it takes place on an oceangoing freighter carrying tons of a volatile, dangerous chemical. That suggests the setting for an action/adventure novel. What we get instead are elegant and thoughtful profiles of the ship’s crew and their life onboard, tied together by the journal of the ship’s second mate.

This novel was inspired by L’Amour’s experience in the merchant marine combined with his exposure to the travails of the many undereducated, unemployed, often desperate men in that era. Many of them went to sea because it was their only choice.

The second mate’s journal chronicles their stories over 11 days at sea. Each chapter outside his journal entries covers one crewmember, showing how and why he came aboard.

“I am leaving my marriage behind,” the second mate notes, “and Mr. Wesley is planning for his. Pete Brouwer wants to go home to Amsterdam, Davy Jones has left his home behind. Mahoney growls and gets drunk; Carter . . . is a religious fanatic and attacks Mahoney for drunkenness when his own intolerance is just another form of intoxication. O’Brien rarely wants to leave his beloved engine room, but Augie Donato dresses in over-loud clothes and every minute he can he goes ashore . . .”

In addition to this cast of characters are a former prizefighter, an aged philosopher who grows geraniums, a hero of a shipwreck being pursued as a murderer, and a family of actors who weave together several of the crews’ backgrounds—without them knowing. The ship itself is a shadow character, omnipresent, lovingly and respectfully portrayed, as it pursues its course toward tragedy.

Through the direct voice of the second mate and indirect voices of the others, readers are treated to artistic descriptions and profound thoughts about humankind and history, life and death, and machines and nature, along with signature L’Amour action. Many of the political observations could place the story in today’s world. The title comes from Shakespeare’s Hamlet, a line in the “to be or not to be” soliloquy, adding to the erudition that flavors the book without dominating it.

Readers familiar with L’Amour’s complete body of work will recognize these traits in many of his stories, and perhaps feel that No Traveller Returns reflects a seasoned novelist rather than somebody’s first book. At the same time, readers familiar only with L’Amour’s most famous tales, especially his Westerns, might be surprised not just by the story’s tone but also by its nautical setting.

So, Louis L’Amour fans and potential fans, hit the bookstores! This is one of his novels not to miss.