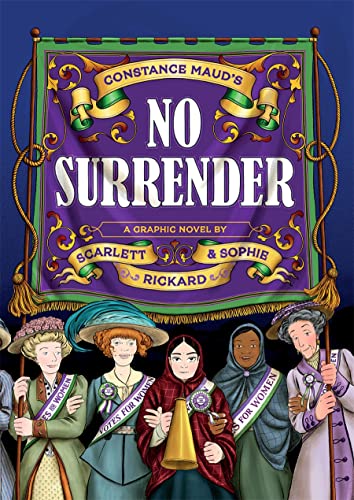 “an important reminder of something that’s easily taken for granted: the right to participate directly in one’s own government.”

Originally published in 1895, Constance Maud’s No Surrender was a powerful cry for women’s voting rights. By telling the stories of individual women and how men’s laws controlled their lives, from owning property to caring for their children to working for a livable wage, Maud laid out the arguments for why women needed to vote. Her book was an effective tool, using individual characters and their stories to win over support for the cause. The book has recently been reprinted so readers can look to the original or they can find the same basic narrative in a more accessible graphic novel format in the Rickards’ version.

The Rickards effectively translate the major themes of Maud’s book and use art to place the reader directly into characters’ lives. The factories, poorhouses, prisons—all feel vividly present. The narrative threads of the women whose lives are featured are tightly drawn. Dialogue presents the women literally arguing with the men trying to control them. The courtroom and prison scenes are particularly strong uses of the graphic format.

The difference in caste and class are also well shown through the art. As one wealthy woman explains while daintily pouring tea: “But this world belongs to men, my dear. Everything is in their hands. If a girl wants to be anybody, or do anything it must be through marriage.”

This is not said to criticize men, but rather to explain and support the natural state of things. Women who advocate for the vote are acting in a distinctly “unladylike” way.

Even men who fight for social justice and better working conditions see the suffragettes as rivals, trying to take good jobs away from the men who need them: “The business of man is to keep his family, and there’s not enough work, so the competition of women is a serious obstacle to the breadwinner.”

As for women who are “breadwinners,” feeding their children, sick husbands, and ailing parents, they’re anomalies who should stay home and care for those people.

The women effectively argue that where women have been given the vote, conditions have improved for everyone. An American woman describes what happened in Colorado once women gained the right to vote (in 1893):

“First, a law forbidding the insurance of children under ten . . . Then a State Home for poor children . . . a real happy home, mind, not a workhouse. Next, making mothers joint guardians of the children with the father. He can’t take the bay away without the momma having a say—not in Colorado. .  . . After that, we raised the age of protection for girls to 18 . . . oh, and a State Industrial School for girls . . . and Juvenile Courts . . . Next we made education compulsory for all children.”

It’s an impressive list. The Prime Minister of New Zealand, where women could vote as of the same year, 1893, echoes the positive effect of women’s suffrage: “The Woman’s Vote has done nothing but good. It has raised the moral, social, and spiritual tone of the is country . . . and I only hope every British country will follow our example and free her women.”

But this isn’t a dry political dissertation. Jenny, Mary, Alice, and the rest of the sisterhood make the story personal and compelling. Their fight feels more than right, it feels essential. The book is an important reminder of something that’s easily taken for granted: the right to participate directly in one’s own government. On the eve of the coming election, this story is more important now than ever. As new laws work to restrict voting rights, it’s crucial to be reminded of how hard it was to get these rights in the first place and what they mean.

While the story ends on the crest of an effective march for votes, with new male allies marching beside the women, the sobering endpapers remind the reader that the battle wasn’t easily won. The different dates women are allowed the vote in various countries show that for many it hasn’t been that long. Switzerland didn’t give women the vote until 1971, Zimbabwe not until 1987. Some countries that aren’t included in the chart have been even slower. Kuwait didn’t allow women to vote until 2005, Saudi Arabia finally in 2011.

No Surrender is a timely reminder of what’s at stake for everyone in the political process. The 1895 text proves to be the perfect basis for a very modern graphic novel. This isn’t musty, dusty history, but history that feels ripped from the pages of today’s newspapers.