No Stopping Us Now: A History of Older Women in America 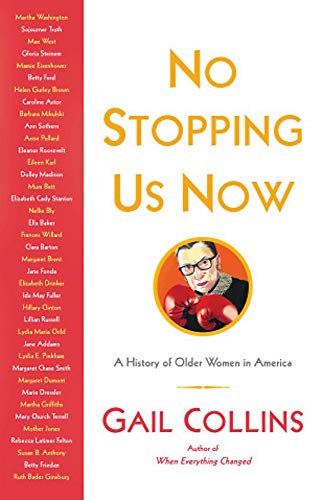 “There’s a reason why forty, fifty, and sixty don’t look the way they used to . . . and it’s not because of feminism, or better living through exercise. It’s because of hair dye.”

No Stopping Us Now is a comprehensive and timely tome about the history of how women who have reached “a certain age,” have been treated. Because she is one of those women, Collins is qualified to write the story.

The book starts off slowly, and can seem tedious, even monotonous, but things pick up with the Turn of the Century. Collins delivers extensive research on how American society and culture has vacillated over the centuries when addressing women as they age.

In the early days, when there were few in the colonies, women were encouraged to emigrate. “If any Maid or single Woman have a desire to go over . . . for if they be but Civil, and under 50 . . . some honest Man or other, will purchase them for their Wives,” so promised an English promoter.

What woman could refuse such an offer?

Then time moved on and the attitudes toward older women, which sometimes meant any over the age of 25, changed. Menopausal women were relegated to a rocking chair in the corner, their “use by” date long past. One hundred years ago Ladies’ Home Journal declared that getting older meant becoming “obsolete, like fine old words erased from the epic of living.”

There are stories of the suffragettes, including Susan B. “Nothing is Impossible” Anthony and Elizabeth Cady Stanton, providing the impetus for successful aging. And, the “doyenne of New York society,” Caroline Astor who was famous for wearing so much diamond jewelry at her annual Opera Ball that one guest likened her to a “walking chandelier.”

Collins takes readers on a journey from the 1600s to present day. Aging is something everyone strives to accomplish. Yet based on Collins’s research, it seems only women are seen as less than when they get older. But as Collins points out, try telling that to the women now. Today, women in their 50s, 60s, 70s, 80s, 90s, and centenarians are hitting their stride and accomplishing more than ever before.

However, Collins makes one thing apparent, age, where women are concerned, is and always has been relative. And whether a woman is old at 25 or just hitting her stride at 70, depends on the times in which she lives.

Hillary Clinton’s age came up in the 2016 campaign and she responded, “I may not be the youngest candidate in this race, but I’ll be the youngest woman president in the history of the United States.”

But when anyone raises questions about a man’s age a hue and cry is raised amid charges of ageism. As with most things, there is no comparable angst shown where women are concerned.

A woman once said, “If you want something done right hire a group of middle-aged, post-menopausal women, and step aside.”

There is No Stopping Us Now and Gail Collins provides women with a historical blueprint for things as they were, as they are, leaving only question of where older women are headed next.

And, as Collins puts it, “the deadline keeps getting pushed back.”