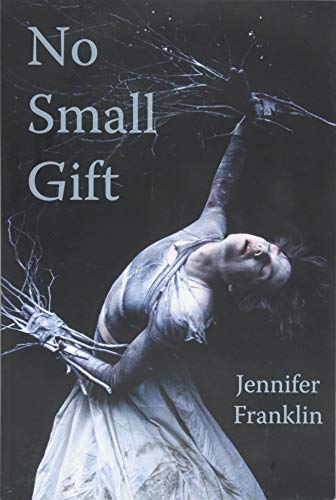 Whether it’s God or fate or karma or randomness, how should we respond when life skewers us with loss and cruel reshaping of dreams into walking nightmares? Jennifer Franklin, whose award-winning poetry has appeared in an earlier full-length collection and in many literary magazines and who teaches this art, rips us out of complacency and away from the simple (if unjust) answers of Job, biblical deity, and bumper-sticker wisdom, to confront more than her daughter’s autism spectrum disorder—instead, she turns the blunt mirror onto her own emotions and choices, until the force of each poem ejects the mirror from the page, into the reader’s hands.

Under a title taken from a line of T. S. Eliot’s, “Human kind cannot bear very much reality,” Franklin recalls that Daisy in The Great Gatsby hoped her child would grow up to be “a beautiful little fool.” Watching her own daughter unable to take part in birthday rituals, Franklin declares:

“All you read are songbooks and sing to yourself

out of tune. At least you’ll never believe in fairy tales

or blame me for walking out after each of us was betrayed.

It’s your birthday again. The few people who love you

celebrate but only the two of us know we have no cause.”

It’s not enough for life to have given Franklin a speechless daughter. She’s also taken the price of loss of speech herself, in treatment for major illnesses that she never quite specifies (but can be perceived from her Facebook posts, if needed). Her wheel of challenges never ceases, and in “Waiting again for biopsy results in the second-floor exercise room,” she declares:

I hadn’t been too self-conscious to learn

the basics of the Argentine tango in

the three lessons before the wedding

in Thessaloniki. Ever since I read

Brontë, I refuse to use an umbrella

and pretend I’m walking the moors even

in the city. I am never where I am.

If I told you what I look forward to,

I couldn’t bear your pity.”

Torn between speechless times (one poem mentions a “trach scar”) and quandaries too intense to turn into word of mouth, Franklin carries the mythological along with the myth makers. She asks her mostly wordless daughter questions that won’t be answered: “Like if you feel sick // or if our ancestors invented cave painting / or song first. You never lie to me // because you do not speak.”

And what is the “no small gift” of the title? Hints arrive with the poem “Philomela considers forgiveness” (reminder: rape victim who in her revenge is transformed into a nightingale). Franklin offers, “He’ll / never admit what he has done, but / in the blue afternoon of regret, // I realize this is no small gift. / I need not wrestle with absolution / since he will never repent.”

With her layered images interspersed with near-playful admissions (“Still life with tongue cancer”—there’s a second way to read that), Franklin turns her journey of devastations into a multidimensional transit of human depth. If joy is to rise out of chaos and pain, there must be a composting process first, an effort of adding air and time. In “Amor Fati,” she marvels, “I didn’t / know these cuts would save // more than my body. / I wouldn’t negate any of it / now if I could.”

Far from the traditional confessional poetry of, say, Ann Sexton or John Berryman, Jennifer Franklin insists that the material of life, even the darkest, sharpest moments, be valued and named. Don’t give this poetry collection to someone in the midst of terrifying treatment for a deadly disease. Instead, purchase the copy for afterward, for the endless loop of recovery, fear, hope, and self-knowledge. In that sense: Recovery lasts a lifetime.

Beth Kanell is the author of Mud Season at the Castle: Poems of the Northeast Kingdom (under the name Elizabeth L. Kanell in 1998), and her poems are regularly found in the Green Mountain Trading Post and online. A fellow of the Bread Loaf Writers Conference and facilitator for PoemTown St Johnsbury, Vermont, she has reviewed poetry since 2002 and served on the board of The Frost Place, a nonprofit educational center for poetry and the arts based at Robert Frost’s old homestead in Franconia, NH.