No Place I Would Rather Be: Roger Angell and a Life in Baseball Writing 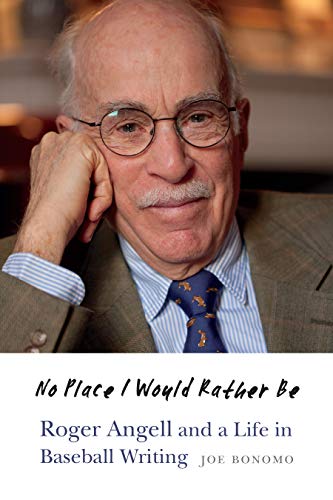 “In 2014, Roger Angell was in Cooperstown at the Baseball Hall of Fame to receive the J. G. Taylor Spink Award "for meritorious contributions to baseball writing." Joe Bonomo’s book offers an infinite number of reasons why this honor was richly deserved. It is a book worth reading.”

Over the years of writing serious analytical essays about the world of baseball, Roger Angell has achieved the status of a cult figure among his devoted fans. Therefore it takes a considerable amount of courage to write a book about the work of this writer, as there is little chance the writing could match that done by the subject.

This is the challenge faced by Joe Bonomo in writing about Roger Angell whose baseball pieces were featured in the New Yorker. Over several decades Roger Angell produced an extended report on spring training and, then, another on the season and the World Series. These were not simply reports on events, but were personal and reflective essays about everything in and around baseball that came to the mind of Roger Angell. Those who were aware of Angell’s work waited each spring and each autumn in great expectation for these pieces to appear.

Roger Angell’s writing is elegant, smooth, and precise. Those who write about baseball read Angell’s work with admiration, joy, and no small amount of envy. Over the years these pieces have been republished in single volume collections, have appeared in countless anthologies, and been quoted over and over again.

One of the first questions to raise about No Place I Would Rather Be is, wouldn’t it be a better choice to read or re-read Roger Angell’s work rather than Joe Bonomo’s analysis of Roger Angell’s work? The answer is a qualified “yes.” Then why read this book at all?

If you are familiar with Angell’s work, Bonomo offers a number of things. If you don’t know much about Angell’s personal life, this volume does shed some light on it. Bonomo offers speculation on what motivates Angell and what shapes his evolving views of the game. It shows how Angell works, the meticulousness of his habits, and his self-identification as a fan, not a sportswriter. Angell’s childhood is minimally explored, including his relationship with his father, his mother, and his stepfather, E. B. White, with (for) whom Angell worked at the New Yorker.

Bonomo includes material on Angell’s unfulfilled ambitions as a writer of fiction, his much admired work as an editor, and the friendly easy manner of his writing, noting, however, that Angell revealed little of his inner life until he reached his later years. Roger Angell is now 98 years old. His baseball memory, therefore, reaches back into the 1930s, and he shares many of those memories within his writings on contemporary baseball.

Bonomo moves more or less chronologically through Angell’s career, examining the changes in his interests and the evolution of his writing, while using Angell’s life as part of the backdrop rather than placing it in the foreground. Bonomo quotes liberally from Angell’s work and, for those who are familiar with the baseball columns, these passages will evoke many fond memories. For those not familiar with Angell’s work it, should produce an urgent desire to read more. In addition, Bonomo offers guidance to Angell’s lesser known work especially from his early career and for his work beyond the pages of the New Yorker and away from the world of baseball.

There are many charms to No Place I Would Rather Be, not least of them being a portrait of Roger Angell in retirement. Angell is a man pleased with the journey he has taken in life, learning to adjust to aging and the new demands that places on him, and dealing with death. He is a man at peace with his life and with the road ahead.

In 2014, Roger Angell was in Cooperstown at the Baseball Hall of Fame to receive the J. G. Taylor Spink Award "for meritorious contributions to baseball writing." Joe Bonomo’s book offers an infinite number of reasons why this honor was richly deserved. It is a book worth reading.