No Option But North: The Migrant World and the Perilous Path Across the Border 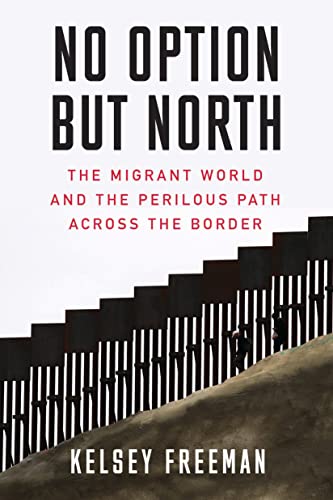 “The book captures, in broad outline, the precarity of the migrant world—leaving behind a very meager existence to venture into the foggy haze of endemic risk, threat, and violence.”

No Option But North explores the lives and existential trauma of the migrant experience for those heading from Central America and Mexico to the U.S., and how the immigration system operates strategically to exclude them. The book captures, in broad outline, the precarity of the migrant world—leaving behind a very meager existence to venture into the foggy haze of endemic risk, threat, and violence.

Portrayed by the Trump administration as, among other things, diseased, these migrants are heading toward the country with the largest global outbreak in the COVID-19 pandemic. This has left 30–40 million Americans unemployed. Such a staggering number will, undoubtedly, fuel further anti-immigrant rhetoric, policy, and practice, as well as drastically reduced employment opportunities (e.g., the restaurant industry whose ranks will be slashed). Migrants will likely find themselves in the untenable position of being unwanted with nowhere to go.

Kelsey Freeman largely gets it right—migrants are driven by the brutal intersection of economic desperation and cartel violence. Cartels and organized crime challenge state sovereignty, form shadow governments, and have deployed all manner of exploitative practices on people and businesses. The North American Free Trade Agreement (and to a lesser degree, the more recent USMCA) have led to the collapse of family farming, an undermining of the working class, and more general impoverishment of what might have been an emergent middle class. Neoliberal policies and practices push already highly impoverished people to the brink. Times are tough in Mexico for your average citizen and far worse if you are from the Central America’s northern triangle: Guatemala, Honduras, and El Salvador.

Make no mistake. Whatever the motivation, the decision to migrate northward reveals a desperation, borne either/or from economics or the violence of organized crime, that trumps the tremendous dangers at every turn of the journey.

Freeman does a good job of laying out the operation of a broken U.S. immigration system where the deck is stacked impossibly against poor migrants. It is little wonder that migrants choose to cross illegally. Seeking U.S. asylum, as she notes, is equally fraught particularly under remarkably xenophobic, nativist administration.

While the book is a useful primer for anyone interested in learning about the contemporary immigration crisis at the southern border, its greatest strength comes from migrants’ stories mostly collected through interviews at shelters in the central Mexican city of Celaya, Guanajuato. It is a working-class city that serves, among other things, as a rail hub. Consequently, trains constantly move through with their migrant cargo.

Through migrant voices we learn of assaults, rapes, robbery, extortion, kidnapping, murder, disappearance, as well as traumatic and sometimes lethal accidents. It is a world where predators, that arc from the criminal to the state, abound. But the most dangerous of all is the border zone itself. As migrants are pushed to greater levels of desperation, they cross ever more remote and hazardous stretches of desert that are effectively controlled by cartels.

To her credit, Freeman regularly reflects on her own status and privilege as a white American with economic power and an exit option. She is acutely aware that she can return to the relative comforts and security of home, while the migrants with whom she collaborated were in an extended form of limbo.

In the end, she finds that one of the shelters in Celaya may have been handing migrants over to the local cartel for cash as slave labor and other exploitations, and that shelter may also have been infiltrated by cartel operatives. Her own security was, therefore, in question and she left Celaya. It was a prudent move for Celaya is a narco-plaza and serves as strategic cartel hub for all manner of illicit trafficking. For the author, fleeing Celaya was a bitter ending to an eight-month Fulbright experience comprised of teaching English and conducting research.

For the uninitiated, No Option But North is a good starting place to begin an exploration of immigration issues. In telling migrants’ stories, it provides a powerful way to connect and empathize with people who are risking it all for a better life. There are, however, minor errors that should have been caught. For example, Freeman mistakes Michoacán’s tierra caliente (hot, tropical lowlands) for a town. She mischaracterizes what came to be known as the 2009 “Tet michoacano”—a series of brazen, coordinated cartel attacks against the federal police and one military installation scattered across Michoacán and neighboring states—as an event confined to Michoacán’s capital of Morelia. Apart from such occasional inaccuracies, Freeman has assembled a readable effort that merits a wide audience.