No One Will Miss Her: A Novel 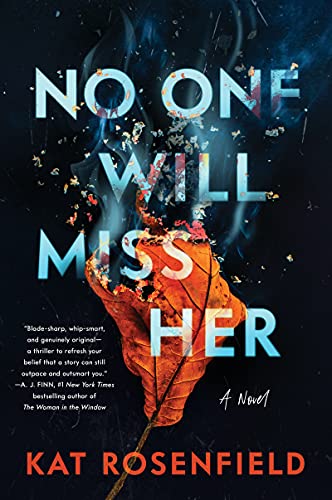 “Gripping and sharp as a tack.”

In a book where every character is fully fleshed out readers can expect to be completely captivated by the story. This book does not disappoint.

On the opening pages, the Copper Falls junkyard is burning, and the wind is pushing the flames ever closer to the houses surrounding Copperbrook Lake.

Deputy Myles Johnson drives around knocking on doors, making sure anyone still there evacuates in the interest of safety. He doesn't expect to find any summer people. It's after Labor Day, all the city folk have packed up and gone back home. In fact, he's tempted to skip the last two houses, but being the exemplary deputy that he is, he stops at 13 Lakeside Drive, the summer rental property belonging to Lizzie Ouelette.

". . . The air in the house was off, not knock-you-on-your-heels bad, but stale and scented with the low, sick notes of something beginning to rot. And that wasn't all. There was blood: a trail of it, thick circular splats on the knotty pine floor just inches from his feet. The droplets, deep red and still glistening, skirted the corner of the cast-iron wood-burning stove, dribbled over the kitchen countertop, and ended with a smear on the edge of the stainless-steel sink.

". . . He should have stopped. He should have considered that a trail of blood ending in the kitchen sink must have a beginning worth exploring before he explored anything else. . . . That he should not, for the love of God, touch anything."

But he did and proceeded to pull out of the garbage disposal something that belonged on the bloody body of Lizzie Ouelette that at the time was lying under a blanket on the bedroom floor.

Weak stomached readers might be tempted to skip the next several of pages, but they'll deprive themselves of some outstanding writing if they do. In fact, the writing throughout the book is superexcellent topped off by author Kat Rosenfield's knack for ending sentences, paragraphs, or chapters with a rimshot. Ba da boom!

The rimshot at the end of that chapter is a real zinger.

Oh, and by the way, Lizzie's husband is nowhere to be found. So naturally he's a suspect. But he's not the only one. Someone else is acting mighty suspicious.

Her name is Adrienne Richards:

"Halfway to her destination, she'd been gripped by another wave of panic and had to pull over to examine her reflection in the rearview mirror, suddenly haunted by the horrifying possibility that she'd missed a spot, and that she'd been chatting away to Anna-from-SoulCycle with a fine spray of someone else's blood prominently displayed on her face."

Lizzie grew up the daughter of a junk dealer in a town where everyone was assigned a role early on and permanently, a town where you were never allowed to be anything but what people thought you were. She was a girl everyone loathed from a distance, a girl every guy in town seemed to know had a mole on her bare breast. Or claimed to, anyway. That's how her body was identified. Given the nature of her wounds, it was the only way it could be identified.

Adrienne's moneyed life is about as far away from Lizzie's as it's possible to get.  Still, they became friends. Both Lizzie and Adrienne were scorned, but for different reasons:

"Adrienne wasn't just a privileged bitch. She was bad, cruel, rotten in the way people are when they've never had to care about anything or anyone else."

The story is told from the point of view of several characters, which always makes for a deeper, more compelling read. Lizzie's first-person point of view is utterly engaging, and even readers who can't get past the idea of narrative from a dead person will enjoy this amazing book.

It seems to be a thing now for reviewers to compare every psychological suspense that comes along to Gone Girl, but the comparison here is nonexistent. No One Will Miss Her stands on its own gilded feet. Gripping and sharp as a tack.