No One Can Pronounce My Name: A Novel 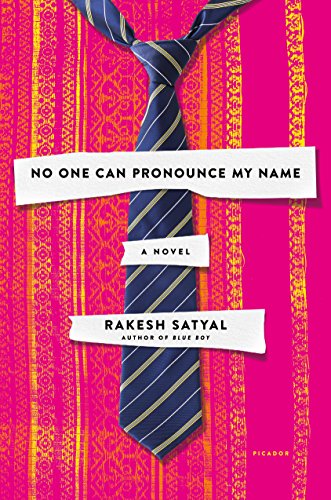 Many writers have written about the immigrant experience, but most focus on the tension between generations: how the older generations of immigrants—those fresh off the boat, so to speak—want to remain full of tradition and sentiment while the younger generations—the new Americans born and bred— want to shun all back-home practices. Satyal has turned this conventional wisdom upside down with No One Can Pronounce My Name.

Ranjana, one of the book’s main characters, is a struggling (and secret) writer in Ohio. Her son Prashant thinks she tries too hard to be unlike all the other aunties he knows, but the truth is that she feels more affinity with her adopted American homeland than she does with India. From her dalliance with romance writing to the Starbucks frappucino in her hand, she’s as different as possible from the stereotypical Indian housewife we see on television and in books.

Other characters are no less complex. Harit has more sentiment for his old life in India, but he struggles to live in a new environment, which he often doesn’t understand. After the death of his sister Swati, he has taken to dressing up in her clothes and makeup to emerge in front of his grieving old mother. This—a sari-wearing middle aged man—in itself is a very nontraditional concept, and thus Satyal continues his novel with non-traditional characters, perhaps to show us that immigrants are just as varied as their native-born counterparts.

True, there are many stereotypical problems addressed in this book, most notably the way “foreign” names are pronounced by Americans. This may seem unimportant to some readers, but the reality is far different. Names form a big part of a person’s identity and therefore mispronouncing a name that can easily be learned correctly shows a lack of openness to the immigrant’s identity in the minds of the host culture. This happens time and again with the characters, leading readers to understand that it is, in fact, a bigger deal than they often think.

Early in the book, Prashant debates with his friends about adopting a nickname. A wildly popular indian girl seems to have none of the problems of identity he has faced:

“It killed him that people pronounced Kavita’s name just fine. There were some people who couldn’t put the soft t into her name, making it rhyme with margarita, but most people had learned the proper way of delivering the right sound. For the first time, he resented her. How dare she hijack his college experience? How dare she show up with her perfect smile and heaven made hair and hell-made ass and make him question his own name?”

Other topics are very much American. Ranjana faces the same feeling of empty nesting that millions of middle-aged parents feel when their child goes off to college. Her husband goes through a mid-life crisis feeling that a wife with a job is a source of embarrassment for a man.

Prashant is a young man with a crush, a nerd at Princeton with all the expectations of our university culture. Harit deals—badly—with the grief of his sister’s death. Regardless of the skin color or ethnicity or country of origin, we all face these life-changing obstacles at one time or another.

The overall takeaway from No One Can Pronounce My Name is that the struggles immigrants face are much more complicated than the basics of life. None of the characters are poor, nor do any of them face social or economic stigma. What they do face is a strange loneliness, as if they are islands within a larger community where they stand out because they are different. For all the pride America feels for its values of individuality and independence, newcomers face the strongest backlash because of their differences: their accents, their physical appearance, and their names.

No one can pronounce their names, not because their names are difficult, but because society wishes to penalize them for their different nature.