No Mark Upon Her 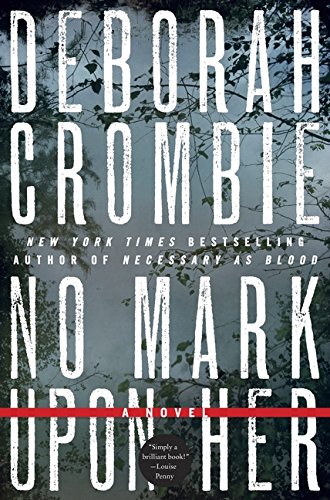 “Readers already familiar with the series may enjoy the deeper exploration of Duncan and Gemma’s relationship and family issues, whereas newcomers—especially those looking for a police procedural more focused on crime and less on domesticity—might do better to read some of the earlier volumes first. Either way, readers who savor excellent writing will find that Ms. Crombie delivers it again.”

People who read a series for its characters generally want the lead actors to come directly on stage. When they don’t, the author must hook readers’ attention and deflect their frustration with a gripping opening—as can be found at the start of No Mark Upon Her.

In nail-biting dread, we share the victim’s last hours, wondering how she’s going to meet her demise . . . then the narrative switches to the supporting characters, each in intense detail, building up to the discovery of the victim’s body—at which point—finally!—the lead characters arrive.

This technique lets readers feel the horror of murder and understand its repercussions on other people’s lives, giving the book depth and a solid moral position without needing to be preachy. By the time Duncan Kincaid and Gemma James get involved, we’re glad that the secondary characters have been established, because their roles are clear and the story doesn’t have to bog down to explain them.

Unfortunately, the focus on secondary characters makes it easy to guess the murderer. The other characters are so obviously not guilty, despite the police’s view of them as suspects, that the only possible perpetrator is the one character who’s never explored. The reader can see this much earlier than the investigators, although everyone is distracted by a red-herring subplot. The two situations do merge in the end, allowing Duncan and Gemma to dig into a juicy investigation despite the fact only one of them is officially on the job.

Freshly married, Duncan and Gemma are on alternating leaves from work in an effort to meld their extended families. This understory expands on the priority conflicts experienced by these two dedicated law enforcement officers, which have been developing through the series—and could make trouble for them if it drags on too long. That will likely be covered in future volumes.

In this story, the couple pops in and out in with greater frequency until the book comes to focus on their investigation. Still, the narrative keeps switching character viewpoints, ending each vignette with a mild cliffhanger or else a sense of unfinished scene. While this is a proven technique for building suspense, here it just builds impatience. The story feels author-driven instead of character-driven.

Other elements interfere with reader immersion into the story, as well. For instance, the police start viewing the death as a murder before their interviews and evidence eliminate the possibility of misadventure (although the reader knows it, thanks to the setup).

A similar jumping to conclusions occurs when Duncan and colleagues inspect the victim’s purse. Compact and simple, its contents are sparse, utilitarian, and consistent with the victim’s personality: a driven woman who is a police officer by day and an obsessed athlete the rest of the time, with a reputation for being strong-willed and tempestuous. Such people tend not to carry big handbags stuffed with jumbled frou-frou.

But the team deduces that the victim was “a woman with something to hide” based on their comparison to what their wives and selves lug around. Female readers who tote minimalist purses will find no sense in their logic leap, even though it sets the investigators galloping down what proves to be the right track.

Similar logic leaps occur elsewhere in the novel, culminating in an absence of clear and compelling motive for the murder. The killer’s motive is best explained through the epigraphs at the start of each chapter, drawn from actual works by actual people who understand competitive rowing.

Rowing, in fact, is the strongest feature in No Mark Upon Her. It provides the means, motive, and opportunity for the murder, along with most character backstories. Ms. Crombie has done her homework and presents the culture persuasively and eloquently. In this, the novel is consistent with others in the series, though in plot it’s one of the weaker entries.

Readers already familiar with the series may enjoy the deeper exploration of Duncan and Gemma’s relationship and family issues, whereas newcomers—especially those looking for a police procedural more focused on crime and less on domesticity—might do better to read some of the earlier volumes first. Either way, readers who savor excellent writing will find that Ms. Crombie delivers it again.