No Man's Land: The Trailblazing Women Who Ran Britain’s Most Extraordinary Military Hospital During World War I 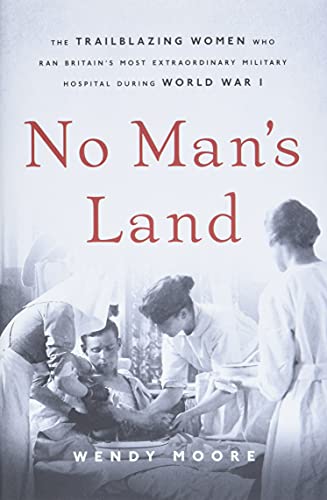 “Wendy Moore’s skill as a writer delivers the story of these women and the history of the war with exceptional power, laying out a compelling combination of casualty statistics and individual human stories.”

No Man’s Land is a story of determination and dedication in the face of overwhelming odds during World War I. The determination and dedication are displayed by Dr. Flora Murray and Dr. Louisa Garret Anderson who founded and directed the first all-female staffed hospitals in France and the first all-female military hospital in London. The overwhelming odds came in the form of the massive casualties on the Western Front during World War I, and the powerful and relentless opposition to female doctors in British military and civilian life that reflected powerful Victorian attitudes in the British middle and upper classes.

Dr. Anderson was a surgeon and Dr. Murray a physician and anesthetist. Both had more than ten years of experience. Neither had any extended experience in a major hospital as female doctors were excluded from mainstream hospitals that were controlled by men. Women were also excluded from the army even as the need for doctors in the military increased rapidly.

Both women were active in the struggle for women’s rights, which had become violent by the time of the outbreak of war. The war changed that immediately as the leaders of the movement called on their followers to end the protests and support the government in the war effort.

Drs. Murray and Anderson were quick to act. Unable to serve in the British military, they organized a group of five women doctors, eight nurses, three orderlies, and four male helpers and led them to France six weeks after the start of the war to set up a hospital to treat the war casualties. Their objective was to contribute to the war effort and to prove that women doctors were equal to men.

The difficulties the group faced in Paris were immense, but they were so successful that the British military called on them to return to London and set up a hospital in Covent Garden. The major focus of No Man’s Land is the story of the Endell Street Hospital and its responses to the changing course of the war. It is a history of the hospital, the war, and the remarkable women who came to serve at Endell Street from all across the world.

Each phase of the war is seen from inside the hospital where massive waves of casualties arrived from the front line, first in Paris and then in London. The nature of the wounds both of the body and the spirit challenged the overworked staff. Later in the war, when Germany began to shell London from land and air, the destruction came within a few hundred yards of the Endell Street facility. Civilians now joined the military wounded who arrived for treatment.

Within a short time, the women and the hospital built a reputation as London’s best, and wounded soldiers were requesting to be sent there. The skill of the surgeons and the empathy of the staff, along with the general atmosphere of the hospital, come to be cherished by the patients. These qualities were maintained under the most trying of circumstances.

In addition to being a remarkable history of the achievements of Drs. Murray and Anderson, this is a moving and harrowing history of World War I. The numbers of dead and wounded in each battle, as well as overall in the war, were staggering. Wendy Moore’s skill as a writer delivers the story of these women and the history of the war with exceptional power, laying out a compelling combination of casualty statistics and individual human stories.

Moore examines the impact of this wartime experience on attitudes and realities toward women in the medical profession which, unfortunately, ends on less than a high note. Change did come, but is was slow in doing so. The fact that it did eventually come is, in no small measure, the result of the remarkable women who founded and staffed the Endell Street Hospital and those who contributed to its success.

No Man’s Land moves beyond the end of the war as for another year the hospital made the transition from treating the wounded to treating the victims of the deadly flu pandemic.

This is history worth knowing and a book worth reading; it is a story of the triumph of the human spirit.