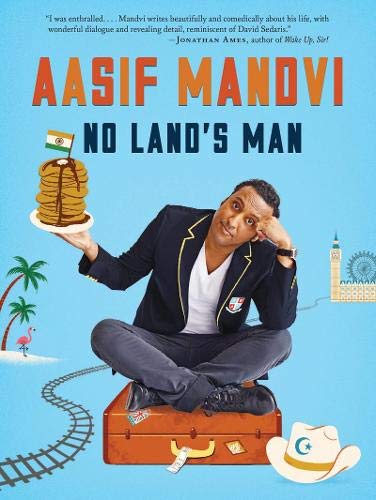 “While his storytelling is entertaining, it’s the uniqueness of his immigrant story and his interesting background that prove fascinating.”

If you are looking for behind-the-scenes dish about The Daily Show, you won’t find it in Aasif Mandvi’s collection of essays, No Land’s Man. But what you’ll find instead are fascinating and funny tales about Mandvi’s childhood, South Asian family, and acting career—all told with rich description and an engaging, self-deprecating humor.

Mandvi, the “Senior Muslim Correspondent” for The Daily Show, begins his story with the realization that even though he had just completed a one-man show, “Sakina’s Restaurant,” about being an immigrant in America, the experience left him with a greater desire for more self-exploration.

In the stories that follow, Mandvi looks back at the events that framed his life, from growing up in an Indian immigrant family in working class England where he regularly encountered classism and racism, to his teenage years as an immigrant when he and his family moved to Florida, and again battling stereotypes while trying to break into show business.

In his essay, “The Ledge,” Mandvi reaches back to early childhood where he endured racist taunts and hazing at the hands of his classmates in an English boarding school, including being forced out on a ledge of his dormitory by upperclassmen while wearing only his pajamas on a typically cold English night.

Yet instead of bitterness, Mandvi amazingly finds humor in the situation and empathy for the aggressors, “We were all the same under the moonlight:  just a bunch of abandoned children in a world where only the strongest and most vicious survived, with no idea how to return home.”

During his teenaged years Mandvi’s father decides to move the family to America, apparently for the express purpose of being able to gorge himself regularly at brunch. A transplant once more, Mandvi struggles to make friends at a typical suburban American high school, where he again faces racism and finds himself an outcast.

After failing to make friends with the only other South Asian boy in the school, Mandvi humorously describes what likely propelled him on his career path, “I found myself without an ally or a group that I could call my own in this new American petri dish. It was only a matter of time, therefore, before I got involved with the wrong crowd: The Actors.”

In later years, when Mandvi pursues acting in New York, he discovers that the demand for South Asian actors is decidedly bleak. After much time pursuing and playing endless stereotypes, the path that leads him to interview with Jon Stewart for a correspondent job on The Daily Show is actually remarkable, but mostly because it’s unremarkable.

Mandvi goes on to describe his unusual position of being cast as the lone voice of Muslim America, and the responsibility that went along with the fame. It’s a fascinating and interesting read: the idea of a man going from relative obscurity to suddenly having people on the street reaching out to him, thanking him for representing all Muslims in America.

While the stories about his exploits at school and behind-the-scenes tales of his career are entertaining, Mandvi is at his best when writing about his family. Even though he makes light of his parents and extended family, the stories are told with warmth and fondness.

Though Mandvi’s background and stories are certainly unique, the stories about his family, and the themes of acceptance are universal. His tone is often reflective, and it is clear that he has dealt with the hardships in his life by finding the humor in the situation.

Though Mandvi’s humor is not laugh out loud funny, it is smart and enjoyable. While the voyeur in us might yearn for him to delve more into serious romances instead of just focusing on superficial dalliances, you can’t blame a writer for keeping some things private.

When comparing his time in England to life in America, Mandvi praises Americans for being so accepting, but notes that perhaps because there are so many immigrants in America, people are less inclined to be curious about other cultures.

For Mandvi’s sake, hopefully he’s wrong about this notion. While his storytelling is entertaining, it’s the uniqueness of his immigrant story and his interesting background that prove fascinating.