No House to Call My Home: Love, Family, and Other Transgressions 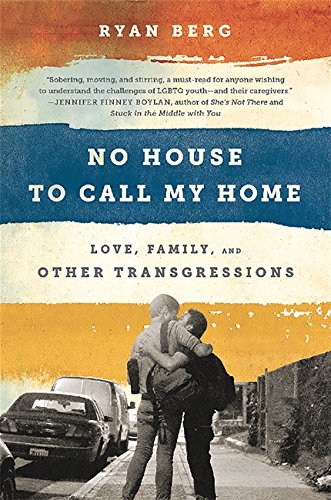 The plight of homeless LGBT youth seldom gets the attention it deserves. Ryan Berg’s book No House to Call My Home is one man’s attempt to remedy that situation.

The Williams Institute at UCLA estimates that 40% of all homeless youth identify as LGBT. That is approximately 10% of the total homeless population in the United States. Most of those kids became homeless because their families rejected them. More than half of homeless LGBT youth report being abused by their families before being forced out.

Almost 94% of all providers deal with homeless LGBT youth. Ryan Berg was one of those providers.

No House to Call My Home is a sobering look at the lives of a variety of LGBT kids in a version of foster care. They do not live with families but in group homes. The challenges they face may seem foreign to many readers. In fact, this is a difficult book to read.

We live in a throwaway world, and these kids represent the human side of the flotsam. The residents of The 401 and Keap Street lash out at the world, the workers, and each other. At the same time, their vulnerability seeps through the angst and anger. The 401 and Keap Street are the last stops before aging out of the system. Once that happens, these young people are on their own: alone, without skills, no money, and little hope.

Some of the residents stand out. Christina lives in a world of her own making that is filled with celebrities and high society. She is playacting in the world to which she aspires.

Raheem is 19 and a veteran of foster homes, “This one place . . . they locked me in a closet when they left the house because they didn’t trust no faggot. I didn’t even get to eat the same food their real kids ate.”

Relating an experience with a local cable show, Berg points out the danger these young people face even in a “safe” space. The program is showcasing kids in foster care looking for a permanent home. A man in the audience ogles Raheem. He’s interested but not in a good way. The guy comes across as creepy with an ulterior motive that has nothing to do with fatherhood. Raheem, however, responds, “That guy really likes me. Wonder if he’s going to be my new Daddy.”

The world that Berg presents is light years from what most people experience. The drugs, prostitution, anger, rage, and institutionalized behavior represented in the book do not register with what many people may think of when envisioning foster care.

Reading the book can prompt readers to put it down and wish the kids would just grow up. Go to school. Do your homework and stop messing around. There is a sense of impatience with the young residents populating this book. Why don’t they listen? Why are they so angry? Why don’t they shape up?

Berg reflects that frustration as he assumes this job as a caseworker. Like many readers, Berg is middle class, well educated, and naïve. It does not take long for him to see that any success is small and too often overwhelmed by the failures. Getting one kid to go to school on one day is a victory.

The reader feels the emotional roller coaster that Berg experienced in his short career. At times it feels like wading through molasses; the daily grind sucking life, energy, and interest out of you.

Readers will not “like” this book. But it is an important book to read. This book makes the reader think about many issues: foster care, the kids enmeshed in the system, homophobia, parents who hate their children because of who they are, racism, and abject poverty.

If nothing else, No House to Call My Home causes the reader to consider what life could have been like without a supportive family, privilege, education, and security. Or recall the disruptions and burdens that have been overcome.

It’s hard to identify with the young people Berg talks about; at the same time it is impossible not to feel an affinity for their pain and their despair. That’s what makes this book easy to put down but impossible to ignore.

And readers will come to the end and wonder: What happened to Raheem and Reginald and Rodrigo and Benny Sybell and Johnell and Maite and Christina and the others. You won’t be able to help yourself.