No Gods, No Monsters 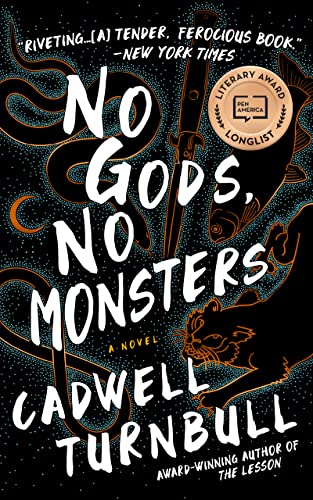 “Turnbull’s prose is captivating, poetic without being pretentious, a pleasure to read. . . . A stunning, enthralling novel.”

One evening in October, Laina learns that her estranged brother Lincoln—possibly homeless, possibly addicted to drugs, possibly violent—has been shot and killed by police in Somerville, MA.

It’s an electric beginning, cutting uncomfortably close to frequent headlines over the past few years. Based on the opening alone, there’s a temptation to assume it will be possible to predict how the novel will progress. But this would be a mistake. This is not a simple story of a police shooting, or Lincoln’s story, or even Laina’s story.

Laina is given a video of the event and learns that Lincoln had secrets she couldn’t have imagined: Lincoln was a monster, specifically a werewolf, part of a community of monsters who react to his death by demonstrating their existence in a highway demonstration that becomes known as “the Fracture.” This in turn sets off a series of events both from monsters who wish to remain hidden and from those who seek safety in visibility, as well as ordinary non-monster humans whose reactions range from denial to empathy to fear.

The novel contains an extensive variety of characters, most of whom initially seem to be unrelated. The setting, too, bounces around from New England to the Virgin Islands, and various spots in between. Monsters range from the traditional—werewolves—to lesser-known cultural variants, including the Caribbean soucouyant, to modern creations like the “tech mage.” The story moves in a semi-linear fashion, with discrete sections dedicated to certain individuals who frequently appear in the background or as minor figures in other. The effect is that of a puzzle box, the entire structure becoming clear as the interlocking pieces fit together.

The novel continually subverts expectations: at any point, a primary character may be revealed to be something other than what might have been assumed, and not always in a supernatural sense. The reader may be well acquainted with a given character before discovering that said character’s gender identity or sexuality is something other than the default cis-hetero; even the novel’s semi-omniscient narrator only becomes evident and identified well into the novel.

There’s a repeated sense of “this was always here, and we never realized” which extends beyond the literally camouflaged monsters. Turnbull handles these reveals with skill and deftness: for example, a nonbinary character is not defined by their nonbinaryness. They just exist, without explanation or forced justification but as a whole and valid individual, as they are.

Despite the sprawling cast, every character is well-fleshed, individual, and sympathetic. The term “monster” is something of a misnomer, as few of the monster characters are by nature violent, malevolent, or even dangerous, as one character indicates to a well-intentioned but confused group of humans:

“‘I’m sorry to do it this way, but I had to be safe,’ Melku explains. ‘I won’t waste any more time. Our collective’s mission is to support the solidarity movement. Often, that has meant supporting marginalized people. Some of you are people of color, and some of you are part of the queer and trans community, like me. Many of the most vulnerable monsters are also a part of these communities, which is why redefining solidarity to include them is so important. In that spirit, I think we should extend our support to monsters since it’s likely that they’re already in the movement but have chosen to remain silent.’

Ridley feels the reflexive terror move through the room.

Nick speaks first. ‘When you say ‘monsters,’ who do you mean?’

Nick: ‘And what does that mean?’

Frankie, glancing at Cassie: ‘Do you know any monsters? I’ve never met one. I’m not sure they actually exist.’

Nick makes a face anyone can recognize, somewhere between shock and rage.”

By and large, monsters, like anyone else, are seeking safety, love, and their place in the world. At worst, they simply demand recognition and acceptance from the human community that fears them.

Turnbull’s prose is captivating, poetic without being pretentious, a pleasure to read. Some of his descriptions are brilliantly vivid and unexpected: a smell “like tobacco smoke lingering on a coat after many years in a closed space,” or bread dough that “feels too alive . . . sticky and wet and clinging.” His story has a painful ring of truth to it, despite the fantastic creatures that populate it, and a beautifully layered complexity that makes it difficult to set down.