No Ashes in the Fire: Coming of Age Black and Free in America 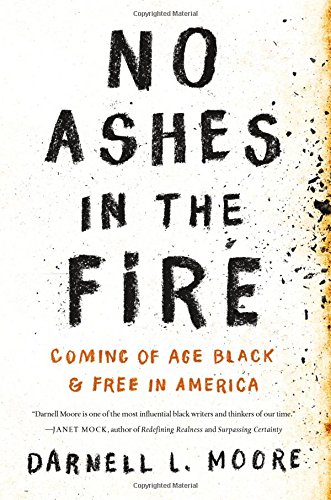 “The long collective hatred of blackness, the calculated policing of sexual difference, the intentional ghettoization of urban centers, and the lure of the American dollar are just a few of the strong forces that shaped my sense of self and the way I viewed others.”

This statement reflects the anguish of growing up in Camden, New Jersey, one of the many epicenters of urban blight in America. Not only have businesses abandoned the residents but so, too, did government. The author mournfully states the perception while “stereotyping black urban cities like Camden as ‘ghetto’ and the people who live within them as leeches sucking the state dry of its capital.”

The residents of Camden were considered “the source of the violence and poverty plaguing the city.” As Moore explains, “We were never the problem.” He attributes entrenched racism, economic abandonment, exploitation and policing through violence as the root causes that inevitably led to community organizing, demonstrations and a fiery uprising in 1971.

His mom and her family were “rich in empathy, support and compassion.” Outsiders assumed that because families in Camden were poor, they made judgments based on the fact that families were struggling financially and failed to take into account the close family ties that held families together. These close, nurturing families continued to be supportive even though care never came from government entities including the police.

While Darnell felt protected from the outside world by his mom and her siblings, the opposite was true of his father. One night Darnell walked in and heard loud sobbing from his mother and witnessed his dad pulverizing the back of her body; dad’s hands that used to be tender with him, “were now used as weapons to make my mom submit.”

That was the beginning of many more scenes like these in the familial home. Once when Darnell tried to step in while dad was punching and kicking their helpless mother, he turned to his son and used his hands toward him. In a flash “I gave up whatever love I had for him in that moment.”

Darnell was not dissuaded by the turmoil he had witnessed, and he became determined to rise above his circumstances and achieve a fulfilling life. The psychological pain he endured from witnessing the domestic violence sparked an inner strength that would not allow him to be deterred from his path. As a young teen, he received the “highest award for achievement in social studies.” And he became a voracious reader of renowned novels such as Of Mice and Men.

While Darnell’s struggle continued, he was also wrestling with another issue in the realization that he was gay. He explains, “I learned how to protect and nurture my desire for same-sex intimacy, long before I began searching for touch in eerie parks and strangers’ beds.” There was a great deal of pain in being forced to hide his attraction in order to make others feel comfortable. As he clarifies the feeling, “Black queer love is a life of solitary confinement. The human spirit breaks when longings so human so acceptable to everyone else are denied.” As a result he kept his secret buried within.

But Darnell’s life surely doesn’t end there. Yes, there were times of great sorrow and a desire at one point to kill himself while struggling with his sexual identity. He rose above his inner turmoil and began to organize another struggle . . . that of the Black Lives Matter Movement after the officer involved shooting death of Mike Brown in Ferguson, Missouri. According to Darnell, “We wanted to do something, anything, because we had grown tired of containing our rage.”

No Ashes in the Fire: Coming of Age Black and Free in America is both psychologically astute as well as visually exceptional. The reader is in the room with Moore when his father is perpetrating intense physical abuse upon his mother. One feels every excruciating word and the thoughts of that scene linger long after the book concludes.

There are many pivotal life experiences in this impressive memoir. The poise of the author as he delineates each one with grace and clarity—qualities of immense strength shine through above all else. Each of his thoughts emphasize the import of a situation and clarify the issues involved from his perspective. And every word is carefully chosen to maximize the emotional impact on the reader. One cannot soon forget this powerful real-life story that affects myriad people in America.