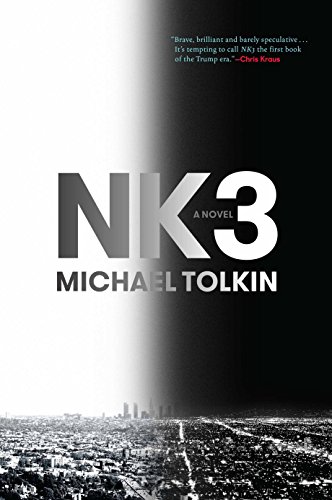 Michael Tolkin is a great writer, and his grasp of satire is excellent. He is known for The Player and his scathing send ups of Hollywood culture. When it comes to roasting the industry elite in Southern California, there are few writers that can match his skill.

However, in order for satire to work, the author must pick a target and stick to that target. The author's aim must be true, and there is very little room for deviation from the target. That is where NK3 falls short. Set in a post-apocalyptic Los Angeles, an apocalypse caused by the NK3 (North Korea 3) virus that wipes human beings of their personal memories, the novel tries to be two things at once—and doesn't do either well.

The post-apocalyptic landscape is filled with characters that are driven by their baser instincts since their memories are mostly destroyed. They can read and communicate and take care of basic bodily functions, but that is about all that has survived the ravages of the virus. A new society has been set up on the ruins of the old and factions have formed. Territory is fought over. Resources scavenged. The weak are subjugated to the rule of the strong, and the free thinkers are forced to hide their thoughts for fear of being urged.

There is more to the story than that simple description, but not much depth. The characters are cartoonish, all blown out of proportion to make some point about power in Hollywood or something. It's so convoluted, with way, way way too many characters to do the intended satire justice, that it is hard to keep track of who are the protagonists and who are the antagonists—if those classifications even exist.

While the writing is excellent, and the narrowness of the satire might be entertaining for those that live and breathe news and gossip of Hollywood and Southern California culture, overall the novel dragged on. Jokes were made, commentary on the shallowness of current society was pointed out, and the characters got themselves into trouble here and there, but in the end it was hard to know what to take from it.

Again, Tolkin does know how to write, but unfortunately NK3 just did not have enough broad appeal to stay entertaining as character after character was introduced and the story progressed to a bit of an anti-climactic and predictable ending.