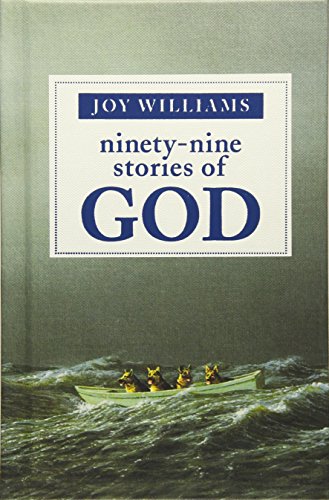 On the back cover of Ninety-Nine Stories of God, by (as her publicity packet references) “Pulitzer and National Book Award finalist” Joy Williams, author Chuck Palahniuk (who wrote Fight Club and knows a thing or two about fiction) blurbs:

“I would follow the trail of Joy Williams’s words—always beautiful, compelling, and so wise—anywhere they led.”

The past tense of the comment is the first indication perhaps that all is not well.

Two blurbs down is one from Jerry Stahl, who wrote a novel called Happy Mutant Baby Pills, and comments:

“Joy Williams’s Ninety-Nine Stories of God reads like a blog-era bible as conceived by Borges, Barthelme, and Mark Twain. No writer alive captures the voices in the post-millennial psychic wilderness like Joy Williams.”

Maybe we should just leave it at that.

Maybe we should not at any point question whether or not we need a “blog-era bible” or the value of a smash-up that forces Twain to kiss up to Borges and Barthelme.

Or maybe we should just all tiptoe out into our own personal psychic wildernesses and be done with it.

Because the post-millennial psychic wilderness presented in Ninety-Nine Stories of God is two-dimensional at best. (As the physical book is itself. It is a skinny little bitch of a book, recalling the old joke: such bad food, such small portions.)

Ninety-Nine is an odd thing. Or, more precisely, a collection of odd things.  Short stories, perhaps. Or outlines for short stories. Or elongated fortune cookie inserts. Or the offerings of a talented writer who seemingly has lost the will to write, all gooped up together for readers who have lost the will to read.

Not that the concept is bad. The idea of sort-of a novel without narrative seems interesting enough, even if the whole thing has been given a cobb-salad chop and then a quick toss. So chapters or stories or whatever they should be called get mixed, and the ones with God (god?) presented as sort of a pleasant uber-dad/alpha-doofus crop up in odd places and at odd times. And with mixed results.

Indeed, the whole of the gaggle of short bits is rather wildly mixed in terms of results. Like this, number twenty-seven out of the ninety-nine, which, in toto, is as follows:

“You don’t get older during the time spent in church, he told us.

“He pushed a shopping cart with a few rags and a bottle of Windex in it.

Here, as elsewhere, we have an interesting enough idea, one that could drive many of us to church services, if not, in a more general sense, to religion. But as a story, as more than a diary entry or dinner table anecdote, it is not quite enough. It neither stirs very much up, nor does it settle anything much in the reader’s mind. It is, sadly, literature as greeting card.

In other words, the mots ain’t so bon.

The rest follow suit in their odd refusal to congeal into something finer than the detritus found on matchbook covers and scraps of paper housed in the drawer of any writer’s desk, all dutifully typed up and numerically arranged.  Some have the odd sound of a Rod Serling narration (“Submitted for your approval . . .”) built right into them. Others transcend and actually do manage to succeed as quality micro-fiction.

Like this, number sixty-six, based back in the Old Testament, when Abraham was ordered to sacrifice his son, Isaac:

“It was Abraham’s idea to make the poor, unsuspecting kid, Isaac—whose name may or may not mean laughter actually—carry wood, the very wood that would incinerate him, up to the altar.  That was Abraham’s rather unnecessary contribution to the story, not God’s.

“Finally, God stepped in and said, No, you don’t have to do it, and just in time.”

This is not the complete story. The first paragraphs (there are eight in the whole story) question the laughter that came out of Sarah, Abraham’s wife, when she was told, at a rather elderly age, that she would have a baby. She laughed and the angel who brought her the news, was displeased. And so she lies and says that she did not laugh.

Is this “transgression,” inappropriate laughter, the reason that God demands the sacrifice of the child after he has rather miraculously been conceived and born and loved and cherished and raised? And the idea that Abraham would insist that Isaac carry the wood that would burn him, a rather direct mirror of Christ carrying his own cross, gives the whole of it some emotional weight.

Indeed, this story, which carries with it the uppercase word REBIRTH at the bottom (for some twee reason, each story has some word or phrase stapled to the bottom, some of which makes some sort of sense, others being oblique enough to only irritate, as if the author decided to give each story a title and then hesitated and numbered them instead, but did not want to waste all those titles), shows what Williams could have accomplished had all her flotsam and jetsam transcended their brevity.

If the reader can make his eyes go wide as he reads, he can perhaps see a certain pointillism in the text. And the character of “god” begins to emerge in a manner not unlike that in which he is portrayed over the many seasons of The Simpsons. As someone well-meaning but rather ineffectual.  Someone who fails to show for the dinner party that is being thrown in his honor. Someone whose angels are bad cops to his good. And, finally, as someone who is and is not knowable.

As the author puts it, in number forty-nine, which is anchored by the words NAKED MIND:

Joy Williams is an author of both talent and skill, who has given us impressive novels and short stories in the past.

Here, she has served her entrée before it was fully cooked, making for a rather poor banquet. And one for which the guest of honor is, sadly, a no-show.