The Nine-Tailed Fox (A Sergeants Sueño and Bascom Novel) 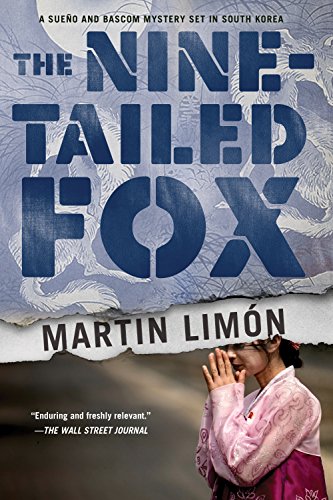 When three American GIs stationed in South Korea during the 1970s go missing, Army Criminal Investigation Division Sergeants George Sueño and Ernie Bascom hear rumors that their disappearances are connected to the local legend of the gumiho, a nine-tailed fox that transforms into a beautiful woman to seduce men and eat their livers afterward.

Suspicious of such a fantastic story, Sueño tries to focus the investigation on a wealthy potential kidnapper who’s good at covering her tracks. However, he and Bascom lose valuable time navigating the difficult terrain between two powerful Army wives locked in a bitter conflict centered on a refrigerator and a women’s shelter, the ever-difficult Korean National Police and Chief Homicide Inspector Gil Kwon-Up, also known as Mr. Kill, and violent encounters with the Chinese Sea Dragon Triad who have expanded into South Korea. Ultimately, Sueño must put his own life at risk in the search for the missing American soldiers.

Martin Limón served ten years in the US Army in South Korea, and his Sueño and Bascom Mystery series reflects a solid understanding of the country, the period, and the difficulties faced by American forces posted in this region during a very complex decade in international relations. His writing effortlessly depicts the sights, sounds, smells and tastes of South Korea and its food vendors, local bartenders, and “business girls.”

What’s fun about Sueño and Bascom is that they’re the farthest thing from armchair sleuths you’ll ever want to find. Ernie Bascom’s preferred method of investigation is to grab something hard, charge directly into danger, and start swinging, with Sueño right on his heels hoping to minimize the damage.

They range up and down South Korea working the case, sticking out their necks in Pusan, Bupyong, Inchon, and Seoul. One of the few American CID agents who’s bothered to teach himself Korean, Sueño takes the lead when interviewing most of the locals, while Bascom watches his back, truncheon or sidearm close at hand.

As far as the narrative itself is concerned, Limón’s approach to storytelling is identical to his characters’ investigative technique. The narrator charges into each scene without unnecessary delay, focusing on the next bit of action to be enjoyed with only enough explanatory or descriptive text to ensure the reader understands Sueño’s thought processes beforehand. It makes for a fast-paced, enjoyable story that is fun and easy to read.

Soho Crime, a department of New York’s Soho Press, has carved out an impressive niche over the past three decades publishing crime fiction set all over the world. Their publications feature atmospheric details that complement the investigations of detectives immersed in exotic cultures and locations. Their list, which includes 50 series in print, features notable authors such as Colin Cotterill (1970s Laos), Henry Chang (New York’s Chinatown), Kwei Quartey (Ghana) and Janwillem van de Wetering (Amsterdam), to name only a few.

Martin Limón’s Sueño and Bascom series is one of the better choices on this list. The Nine-Tailed Fox is a worthy addition to the series, which now numbers 12 titles in all, and if you love a fast-paced, humorous crime novel, don’t miss it.

Just make sure that at some point you zip on back to Jade Lady Burning (2003), in which this rollicking tour of 1970s South Korea begins, and start working your way forward through the series. These crime novels are like snack food for your hard-working, tired brain; you won’t be able to read just one. Sueño and Bascom are impossible to resist.