Nine Quarters of Jerusalem: A New Biography of the Old City 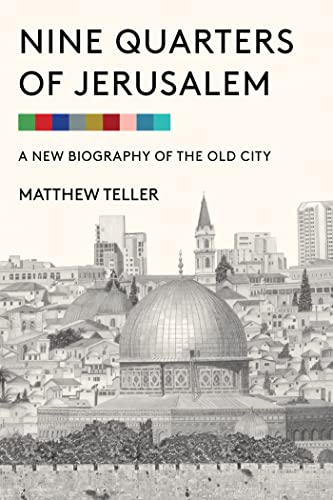 “For those looking for factual information and a new perspective on an old topic, fortunately there are other books out there.”

Matthew Teller writes for the BBC, The Guardian, Times of London, and Financial Times so one expects a well-written, carefully researched book. Sadly, this book is neither. Teller presents himself as the first person to clearly see what is actually happening in the jumbled chaos of Jerusalem: “Whatever you see here is not what’s really going on,” he asserts. His position is not neutral or apolitical, but anti-Israel, a stance threaded throughout the book without admitting the underlying bias.

He presents his opinions as facts, stating that only in Jerusalem is the term “quarter” used for neighborhood. Except, he admits, there is the “French Quarter” in New Orleans. And some cities have “Jewish Quarters.” He mentions Prague and Krakow. This word, he insists, is not an innocent one:

“That hints at the nuances of power carried by the word in English, nuances of military origin, class hierarchies and cultural, nationalistic or ethno-religious separation. Quarters, it seems, are for minorities.”

In fact many cities have quarters—the “Latin Quarter” in Paris, for example—with no such connotation as Teller reads into the word. Perhaps ghetto is the word that actually fits his negative sense, but that’s a word used mostly for Jewish neighborhoods, in Paris, Rome, Venice, perhaps also in Prague and Krakow.

He baldly states that no other city has a market as chaotic, rich, and varied as the Jerusalem souk. Those who have traveled to Turkey, Morocco, Egypt, India, Myanmar, and elsewhere may disagree. This habit of presenting opinion as fact is not something one expects from a journalist, yet it happens repeatedly throughout the book.

The big reveal that Teller presents is that maps of Jerusalem divide it into four sections, labeling Jewish, Muslim, Christian, and Armenian quarters. He “discovers” that this was actually an imposition of the British during their protectorate. It’s not big news that the British framed much of how that entire region of the Middle East was defined, but Teller acts as if this information is so incredible, it should change how one sees the city. Even if one agreed that this is an amazing new insight, Teller could have described the historical development in a few succinct pages instead of laboring over the details in dozens and dozens of pages. He encapsulates his research in a paragraph that spells out the significance to him:

“The core tragedy is that such ideas remain current. An Israeli government director of planning wrote less than thirty years ago: ‘Since the British planning perspectives of Jerusalem were laid down, no other dominant town planning elements were formed in the city.’ So today, when you look at Jerusalem’s walls, or walk its ramparts, or approach its gates, hold in your mind that what you are seeing is essentially an Arts-and-Crafts vision of an idealized medieval walled city. Our twenty-first-century experience of Jerusalem is rooted in, and framed by, a regressive nineteenth-century British rural sensibility.”

Is it? Teller has written nothing to convince the reader of this. He clearly interprets the effects of the British that way. To others, it may be just one more layer in the palimpsest the city offers.

The message Teller delivers—and it is a message, not a history, not a gathering of different sources and voices, as claimed—is problematic. Then there’s the additional issue of the writing itself. For some odd reason, he’s chosen a jocular, informal voice that’s an odd blend between bad dad jokes and mansplaining. Here is one example:

“But now, let’s eat. Abu Shukri’s, directly across the street from the 5th Station, serves amazing hummus. Amazing. You’ve never tasted anything like it.
Okay, that’s it. All done here. Move along now.
Wait, you want more? Well then, here’s the long version.”

“Then again, embassy, schmembassy. Let them salute their flags. Felipe VI of Spain calls himself King of Jerusalem. So what?”

Teller purports to offer a wide range of views about the city from its diverse population. For a more successful achievement of that, look instead for Ethan Michaeli’s Twelve Tribes: Promise and Peril in the New Israel. Michaeli interviews a wide range of people, introducing the reader to a broad range of voices in an even-handed way. For better understanding of the history behind (and beneath) the modern city, a better choice would be Andrew Lawler’s Under Jerusalem: The Buried History of the World’s Most Contested City. Lawler has done the research that Teller hasn’t bothered with and writes clearly not just about the British Empire and its motives, but the Ottoman as well. Lawler describes convincingly how the past has shaped the present, from a historical, non-partisan viewpoint.

Both Lawler and Michaeli accomplish what Teller fails to do: provide a vivid understanding of a complicated city based in careful reporting and historical research. And they do it in clear, cogent prose, not once using the phrase “you know,” as Teller repeatedly does. Perhaps Teller felt this book was his chance to get away from the stringent demands of journalism, a place where he could indulge his opinions and “voice.”  If that’s the case, a novel would have been a better idea. For those looking for factual information and a new perspective on an old topic, fortunately there are other books out there.