Nine Nasty Words: English in the Gutter: Then, Now, and Forever 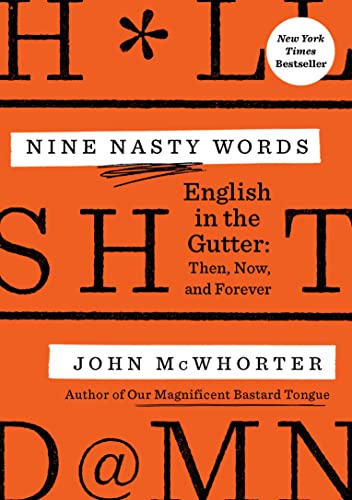 “Readers seeking a sterile understanding of profanity with all the lewdness and bawdiness sanitized away and air-brushed out will likely find Nasty Words beyond their comfort zone. But those who love words and the magic and mischief they make in life will be spellbound.”

Two paradoxes within Nine Nasty Words make it a most enlivening read. The first is of profanity embraced by the masses while also being held in puritanical quarantine in certain quarters. The second is McWhorter’s personal anecdotes and guy-on-the-next-barstool’s witty and often cheeky asides juxtaposed with his brilliant, erudite, dizzying command of the English language.

This is not a book for those who are easily offended. Readers seeking a sterile understanding of profanity with all the lewdness and bawdiness sanitized away and air-brushed out will likely find Nasty Words beyond their comfort zone. But those who love words and the magic and mischief they make in life will be spellbound.

Nasty words have a quirky kind of power we can actually view via PET scans. When we speak ordinary words and sentences, the left, logical side of our brain lights up, and when we curse, the right, emotional side illuminates. Hence, McWhorter views profanity as not merely words, but something “clad in the guise of words, like those little chocolate liquor bottles; to approach these with thoughts of Godiva and Russell Stover is missing their point, which is what’s sloshing around inside of them.”

The point of the book is that the power of these words, vested as they are “with the power of transgression,” lies in what’s sloshing around inside us. They are a part of language as well as of our emotional repertoire.

Therefore, unsurprisingly, much “profanity in English tends to consist of words of one syllable ending with a consonant.” Such construction packs a perfect punch for intense affective expression. This is why though which words are frowned upon changes over time, the fact that some words are assigned taboo status will likely always be the case.

McWhorter traces the history of each nasty word—plus others that didn’t make the starting lineup— by detailing linguistic origins, transformations of spelling and meanings over time, usage in general and specifically in the arts, and their standing in today’s society. He delineates three historical strands of profanity: when the worst you could say was about religion, then about the body, and nowadays about groups of people.

Damn and hell, deemed profanity lite, do not even make McWhorter’s list of nine nasty words in spite of the enormous impact they had hundreds of years ago when damning someone to hell was the worst vitriol you could wish on someone. Showing “a split between public ideals and private reality,” damn and hell are today used liberally and openly, but with a whiff of forbiddenness still clinging to them, compelling people to use words like darn and heck to avoid stepping into what might be perceived as dirty waters.

Though the origin of fuck is obscure, the earliest identified use has a monk in 1528 writing about “a ‘fuckin abbott.’” Ironically, the word was likely employed in lieu of damned whose usage was socially forbidden in those ultra-religious times. Even earlier, in 1503, it was said as “fukkit” meaning fucked, but in Scots, not English. The word was even part of people’s names such as Henry Fuckbeggar and Simon Fuckbutter back in the 1200s and 1300s. The truth, says McWhorter, is that we are unsure in what language the word originated before being adopted to English and accruing all the versatile connotations it has today which allude to joy, dismissal, emphasis, destruction, or deception.

It appears that shit was used in Old English before 1000 CE as freely as poop is today because most people lived off animals and the soil and excrement was part of daily life. Yet because of all its detestable aspects (the smell, the mess), “there are no human societies in which feces in not considered repulsive.” Like fuck, shit has become a word with a plethora of meanings—stuff or problems in “your shit,” essence or authenticity in “my shit,” worthlessness in “that shit,” and high praise from Black vernacular in “the shit.”

Then there’s the word ass which referred way back to “animals that made people miserable” until it became a euphemism for buttocks. Today it has various meanings especially when it becomes a suffix with adjectives like “big-ass” or “broke-ass.” It has even graduated to a pronoun as when someone says, “I’m going to kick your ass,” meaning you.

Penis and vagina fall under the umbrella of body part profanities, both of which McWhorter describes as formal and Sunday best as opposed to “snickery” words like dick, pussy, whang-doodle, weiner, cock, vajayjay, or vadge. He laments that “for the respectable person the choice is between antimacassar dissimulation and sassy gutter talk.”

Singling out the word dick, he explains how its stick-to-itiveness in the language came about when so many other words for the male appendage have disappeared from general usage. He also discusses why the word cunt, a “starker, meaner vicious slur” than the scornful, but more playful pussy, “is today the most taboo of the taboo words other than N****r.”

McWhorter says that, in fact, the N-word is “possibly the most taboo word in this book.” He speaks of his discomfort in writing the word out and why he chooses to do so though he sees it as a forbidden utterance. The word was first used in English writing in the 1500s to mean a Black person and remained somewhat novel in the 1700s. The word went from neutral to impolite to profane after World War I, and the “outright forbidden status of n****r settled in only at the end of the 20th century” with the advent of Generation X which, having been raised in the post-civil rights era, took a stand against the debasement and derision it carried.

McWhorter writes about its appropriation as “a term of abuse into one of affection” by the Black community. He offers a thought-provoking discussion on the acceptability of Blacks but not Whites using the word, delving into the vast difference between the N-word and nigga, which he describes as having legs. In sum, he says that n****r “is profanity, and profanity of a dazzling range of shades, in a way that reveals it, in all of its menace, filth, scorn, teasing, warmth, love and interracial outreach . . .”

He describes faggot as “the other F-word” whose origin, oddly, was likely a bundle of sticks and which “as profanity is an American development . . . that gets from women to gay men, then, via a pathway of association still vivid today, where gayness is equated with weakness.”

He explores the history and current day usage of cocksucker, dyke, and bitch while leaving until last an examination of motherfucker, which came onto the profanity scene in the late 1880s when it was embraced, in particular, by Black people. The word, often said as muh-fucka, no longer has to do with anything maternal and “is now less a bit of meaning than an opaque splotch,” akin to the word fucker.

Hopefully, this delightful and scholarly exploration of profanity will move us to think more generously about so-called nasty words and give us a deeper intellectual understanding of their place in modern life and in our own lives.