Nine Lives: A Chef's Journey from Chaos to Control 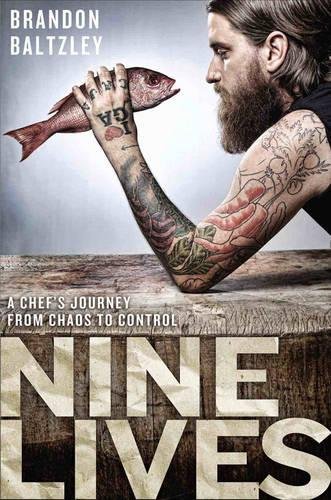 When it comes to addiction, people often ask, “How could someone use a substance to the point of destroying everything and everyone around them?” The misconception still exists that addiction is somehow a moral weakness, but the evidence proves otherwise.

Even the American Medical Association has recognized for years that addiction is a disease. The insidious nature of this illness causes irreparable harm to those who are afflicted with it, but for many that first drink or drug is the beginning of a slow descent into hell.

If a reader of Nine Lives can comprehend this concept one would surely understand the life and death struggle depicted by author Brandon Baltzley. This powerfully gripping memoir gently convinces the reader that no one would consciously choose this struggle for all the riches in the world. Though the battle is his alone, there are millions who are fighting this battle while horrified loved ones witness firsthand the insatiable desire of the one afflicted.

Nine Lives is unique among other memoirs of this ilk in its characterization of the inevitable downward spiral of drug addiction. Contrary to others in this category, it is not the typical “drunkalogue” (an endless repetition of horror stories, morbid binges, and hangovers) that have flooded the marketplace in recent years.

Did Mr. Baltzley lie, cheat, and con others in his quest to fulfill his desperate need for drugs? Of course this is part of his story. But equally important is his passion for creating beauty and love toward others through his first love: that of preparing the most original gastronomic delights known to many across the country.

As a child of a single mother who opened a small café, young Brandon was put to work beside her in the kitchen. According to Mr. Baltzley, “Cooking held my attention like nothing had before, and from the first moment, I was hooked.” Mom not only diverted his short attention span toward something useful to her, but she introduced him to the “joy of experimentation.”

He became a master at mixing unusual ingredients and taste testing them until he discovered that magical combination that could melt the heart of the most skeptical customers. He quickly became enthralled with sharing his passion for food to those he loved as well as strangers searching for new and tantalizing dishes that would inevitably delight the most discriminating palate.

From small establishments to elite restaurants with an ensemble of professional cooking staff, he made his way to the bright city lights of Chicago, New York, and Washington, D.C. Even with accolades from critics as well as restaurant owners, his addiction continued to haunt him wherever he went.

He repeated the cycle of going to 12-step meetings, staying clean for a few months, and then a relapse, getting fired and starting the process all over again. He would have manic binges where he would spend thousands in a week on cocaine.

At the end of his rope he felt that death was the only solution to his problem. After a short stint at Bellevue in New York, he was more willing to dedicate himself to the recovery process. And once again he was back in the kitchen creating dishes such as turnip confit, creamed Swiss chard, and polenta with mushrooms. In a pinch, a simple brownie with ginger ice cream would do.

Ultimately, he founded his own restaurant called Crux and put to use the many lessons learned from his many endings and new beginnings. He became acutely aware that like a cat he had survived at least nine lives.

Any reader of Nine Lives could be mesmerized by the enmeshment of beautifully adorned food coupled with the complexities and dark sides of the human condition. True foodies will glean much from witnessing the magic and art of creating a culinary masterpiece. And addicts, recovering or otherwise, will recognize a familiar spirit in a memoir both touching and mortifying.