The Nile: A Journey Downriver Through Egypt's Past and Present 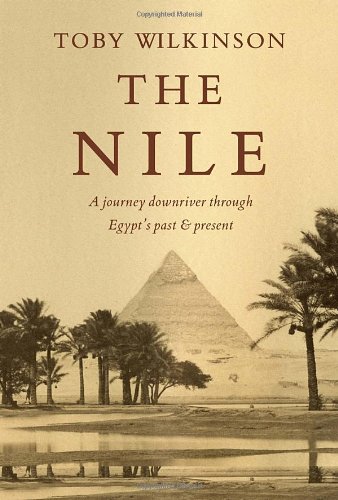 “. . . in this felucca voyage of the Nile, you see all of its history and you are constantly reminded that Egypt is also a living nation of today.”

In the greatest age of egalitarian exploration, a person can tour exotic lands and search for lost worlds from the comfort of an easy chair at home or through a few keystrokes. Compared to any other time, today's "traveler" has unimaginable power to see through books and video to beyond just an individual life, the results of our age of education and enlightenment. The opportunity to physically connect with almost anywhere in the past, within the present, is also available as never before.

Like the Chinese and the Egyptians of thousands of years ago, however, we too seldom appreciate the gifts we have received. Even concerning the land of the Nile, the visitor may know of the history and the monuments but may not realize the sheer artistry that has always been a major draw to that place.

Toby Wilkinson gives us those advantages in this book and his others on Egypt. He has done for popularizing this land what Michio Kaku and DeGrasse Tyson have done for astronomy and physics. His new book reaches us as those by Herodotus, Siculus, Strabo, Naser-e Khosraw, Rudolph von Suchem, and Amelia Edwards accomplished in their times.

As the author explains throughout, this land was often the most important place in the Middle East and today it is the largest and the most volatile country in that region. It has long affected global politics. Understanding Egypt, however, requires knowing the Nile, the greatest of its many important geographical features.

Egypt may not be the gift of the Nile but it is wholly dependent upon it. The river flows north but the winds usually blow south, making its sail boats one of the world's cheapest rides, although necessarily at a leisurely meditative pace. All peoples who have lived on its banks saw it as magical and spiritual. Only in the relatively modern times of the last 150 years has anyone even vaguely understood the river’s origins, what had been its greatest but far from only mystery.

Wilkinson takes us on a trip north and "down" 1,000 miles of that great river of history, from Aswan to Cairo. The Ancient Egyptians realized that the Nile took the shape of their common papyrus plant from which they took the material for the books that made their civilization so great.

Every chapter and usually every page of this book have gems of stories and details from thousands of years of history. For Luxor’s famous columned temples, for example, he emphasizes, as he does elsewhere, that ancient Egyptian religion was not just about the river and the land but also the sun. He details how the Romans and others reworked the temple for various political ends, illustrating that nothing lasts forever, even in Egypt.

As a guide, the author tells us of 300,000 year old axes, crocodiles, Pharaohs, Romans, terrorists, stolen obelisks, archaeologists, farmers, Christians,  dams, car parks, the Arab Spring, socialites, and so much else, mile by mile. Even the role of Thomas Cook in developing the nation’s tourist trade has a place.

Wilkinson writes not just of the conquerors, explorers, writers, and ordinary tourists but also of the artists and of the invalids who came to that place in hopes of regaining their health. He takes the reader on a detour into the Eastern Desert and into the West bank because both are intimately connected to the river. The Nile Delta, however, has no chapter. Along the way, we also learn new words from his sophisticated vocabulary.

The author does not omit the problems of Egypt’s past or present. Corruption, heavy taxes, and impressed labor did not end with the ancient world. In World War II, Egypt was occupied by hostile military force of more than one million men. King Farouk, Egypt’s last king, merits mention in this book because he merited nothing else.

At the same time Wilkinson never loses sight of the sheer wonder and beauty of the place or of its people. For any kind of tourist, but especially from the easy chair, it is too easy to only see Egypt only for its temples and tombs; but in this felucca voyage of the Nile, you see all of its history and you are constantly reminded that Egypt is also a living nation of today.