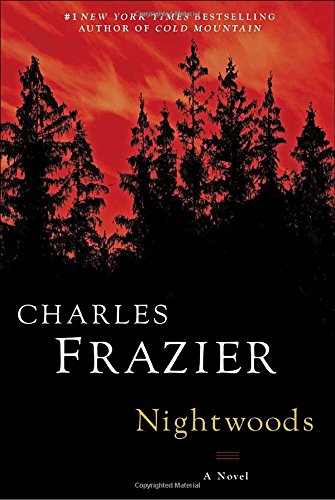 “Mr. Frazier’s writing is so fine it needs to be savored. These people are as unique as all human beings are; not one of them can be wholly admired or detested. The mountains, the weather, the flora—all close around the story, as much a part of the tale as any other aspect. All of which adds to the tension.”

From the author of the National Book Award-winning Cold Mountain and the bestselling Thirteen Moons comes a new novel set in the South but moved up into the 20th century.

Charles Frazier proved himself a powerful writer of historical fiction, covering the Civil War and the Trail of Tears in his previous novels; however, it is not exactly from history that he derives his power but from his depth of characterizations and his ability to bring the natural world surrounding those characters so vividly to life. Though Nightwoods takes place in the 1960s, he has lost none of that power.

Lit and Lola: Lit is that kind of soldier who never moves on. World War II and its grueling mix of boredom, discomfort, and violence have never been matched by life since then—not to mention the quality of the drugs available. Lola is the teen bride and mother who would rather drink, party and fight with her husband than raise babies.

Luce and Lily: The daughters of these two, abandoned by their mother and neglected by their father, grew up destined to be harmed by men.

Such potential caricatures of dysfunctional life take on roles suitable for a parable in the hands of Charles Frazier. So when Lily’s husband Bud, straight out of Flannery O’Connor territory, kills her in cold blood, the state dumps Lily’s fraternal twin youngsters on Luce.

These kids exhibit obvious signs of abuse, something to which Luce is no stranger. She herself is living practically like a hermit in a rundown former summer lodge as a nominal caretaker, wanting nothing more than to be left alone. When she learns that Bud has been acquitted of the murder, she knows such will not be her destiny.

Charles Frazier takes a good half of the novel setting this up, but every few pages he drops in another startling fact. By the time it becomes clear that Bud is the psychopath bent on ruining Luce’s entire family, the reader is so wrought up and unbalanced there is nothing left but to read on, never knowing who will live and who will die.

Except that Mr. Frazier’s writing is so fine it needs to be savored. These people are as unique as all human beings are; not one of them can be wholly admired or detested. The mountains, the weather, the flora—all close around the story, as much a part of the tale as any other aspect. All of which adds to the tension.

The question in all of Charles Frazier’s novels has to do with how our humanity to others can possibly survive when one psychopath can ruin it for everyone around him. Bud was made to go to church as a child, where his natural-born criminal instincts made him open to the message that the sacred shedding of blood mattered above all else. The proffered answer in Nightwoods is that shared blood can redeem a lost soul now and then—but not always and not necessarily for keeps.