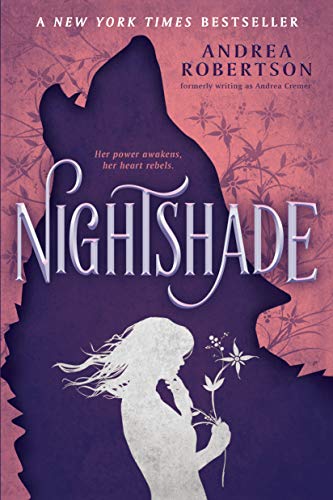 Young adult paranormal novels have been awash in all things vampire, werewolves, and angels to name a few of the more prolific creatures. Nightshade by Andrea Cremer doesn’t stray from a popular choice—werewolves, but she certainly puts a fresh and intriguing spin on it.

The premise of Nightshade is quite simple: Seventeen-year-old Calla Tor is a werewolf—when she’s not behaving like a normal student at the Mountain School. The time for her upcoming nuptials is fast approaching. She’ll be pairing up and marrying Ren Laroche, a fellow student and werewolf. Calla and Ren are alpha wolves. The marriage solidifying their union will serve as the catalyst for uniting their respective wolf packs, the Nightshades and the Banes. Calla and Ren will then rule the newly created pack and fight side by side as one. This has always been the plan since they were small children. It has always been their destiny, but as often happens, plans change—no matter how much we may wish otherwise.

Calla goes against all the rules of her kind, of the masters that control them, and saves the life of a boy who has strayed into the wrong part of the forest. He’s no ordinary boy and Calla will soon find out that there is much more to Shay Doran than the beautiful visage that captures her imagination as she risks everything to save him from a sure and certain death.

Andrea Cremer has excelled in her world-building endeavors. She’s created a story environment that is rich in history and in the foundation that supports and explains it. The connection between the werewolves and their masters, the Keepers is original. It gives what could have been a run-of-the-mill paranormal romance teeth (sometimes quite literally) as well as depth. And let’s not leave out the Searchers, another group, mysterious in their origins that is mixing it up and wracking havoc in the story. Cremer, a history professor, has clearly put her expertise to excellent use.

The scenes are vivid and often filled with action that makes it hard to put the book down. Considering there were quite a few characters in this story, Cremer effectively conveyed the nuances of their feelings and interactions. This novel is not a stand-alone book and ends in a definite cliffhanger. Some readers may not be happy about this, but this reviewer is willing to wait.

Nightshade is the first book of a trilogy. The second installment, Wolfsbane is due to be released July 2011. The first book ended at a critical moment, leaving me looking forward to what happens next.