Nights of Plague: A novel 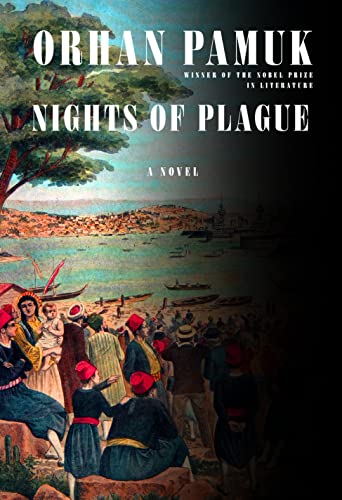 “a fictional history of the slow dissolution of the Ottoman Empire itself, crumbling under its own corruption, starting at the end of the 19th century.”

The Nobel Prize-winner Orhan Pamuk knows how to do historical research and present it in inventive ways. Nights of Plague purports to be a “true” history, written by great-granddaughter of the deposed sultan of the Ottoman Empire. The “author” describes using historical letters for the basis of this richly involved chronicle of plague stoking political upheaval on a small idyllic Mediterranean island. The book is more than an exploration of how vested interests use rumors about a deadly disease to inflame passions and upheavals. It’s a fictional history of the slow dissolution of the Ottoman Empire itself, crumbling under its own corruption, starting at the end of the 19th century.

The events described in the book take place in 1901, a well-chosen date since medical understanding of how the plague is spread evolved quickly at the end of the 1800s. A French doctor was the first to recognize that plague was spread by the fleas living on rats and that cleaning and quarantine could control the deadly disease. Much of the rest of the book feels timeless—the strife between Christians and Muslims, the political machinations of those in power, the reactions to more and more stringent quarantine measures.

Real history provides the bones and sinew for this invented island plague: the Boxer Rebellion, the way the Ottoman Empire unraveled, “losing its Orthodox Christian populations across the Balkan states and on its islands in the Mediterranean.” And how the Sultan “began to warm to the notion that if he was seen to openly favor Islam (as the new demography of the Empire was already suggesting), he might be able to rally the world’s many Muslim communities and nations to stand with the Ottomans against the West, and at least give the Great Powers something to fear. In other words, the Sultan was beginning to discover all by himself that force which we now call ‘political Islam.’”

Pamuk vividly describes the detailed texture of life on Mingheria, the island, along with the tension of a brutal disease threatening an entire population. He introduces a dizzyingly complicated cast of characters both from the present situation and the recent past of the Ottoman Empire. As if that weren’t enough to carry along the tangled narrative, Pamuk adds yet another element: that of a murder mystery, with frequent allusions to the crime-solving techniques of Sherlock Holmes.

It’s a lot to pack into one book, but Pamuk allows himself the time and space to carry it all off brilliantly. The plague story, the political one, the murder mystery—all converge in an unpredictable and satisfying way. This is a book to savor and read slowly, not to race through. Its pattern emerges slowly and richly, like a fantastical Turkish carpet, carrying the reader into a world that’s both imaginary and very real.