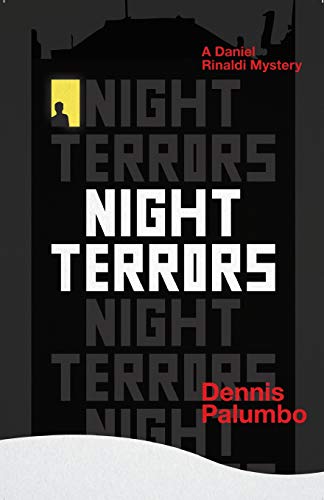 If you are ever in Pittsburgh and run across psychologist and trauma expert Daniel Rinaldi, run in the opposite direction. He attracts mayhem like pollen attracts bees.
The FBI wants Rinaldi to help one of their own: retired profiler Lyle Barnes who doesn’t want to sleep. When he has to give in to exhaustion and nap, he flails and screams—it’s easy for Rinaldi to diagnose these symptoms as night terrors.

Barnes’ specialty has been profiling serial killers, so it’s no wonder sleep is a horror, and in true smartass, tough guy FBI fashion, he has researched all the treatments for his condition, so treating him is all the more difficult.

Both Barnes and Rinaldi know in a typical night that dreaming happens during the rapid eye movement (REM) stage. But night terrors happen during deep in non-REM sleep.

It’s not clear why.
And unlike nightmares, which we can usually remember, patients won't have any memory of a night terror the next day because they were in deep sleep when it happened there are no mental images to recall.

So how does it get treated? Very carefully.
For a little extra suspense, Barnes is being held in protective custody by the FBI because there’s a killer out there who’s knocking off anyone involved in the prosecution of an old case, and Barnes looks to be a likely target.

But when Barnes has enough of being held against his will and takes off, the book loses its most interesting character.

Dennis Palumbo makes good use of the severity of a Pittsburgh winter, because everyone in the city is bundled up against ice and snow. Descriptions of the bad guy are all depressingly similar and useless—dark coat with a balaclava. It could be anyone trying to stay warm.

The book twists off to another tangent when Rinaldi takes on a case of a mother whose convicted son is intent on taking responsibility for a murder when she full well knows he was with her on the time in question. So why does he insist he’s the killer—even leading the police (and Rinaldi) to the body?

Although the mother/son case is interesting, the specter of the Barnes and treatment of his night terrors looms over them, and the reader is waits for the psychologist and the profiler to connect.

This novel will never be used for FBI promotional material. The Bureau is monumentally shortsighted, throwing their weight around to no avail, and in condescending to local police, loses a valuable asset in solving crimes. Perhaps it’s time to create an FBI agent that’s not stupidly full of the power of THE Bureau.

Mr. Palumbo has the ability to make his flawed psychologist’s ability to connect with his patients believable. He does this by sometimes getting inside his character’s head and letting the reader privy to his thoughts. It’s an orderly way to see the shift in treatment methods: “Wait! That won’t work. Let’s try this.”

If Rinaldi steers clear of mayhem, maybe his next case will involve a trauma patient receptive to quieter methods.