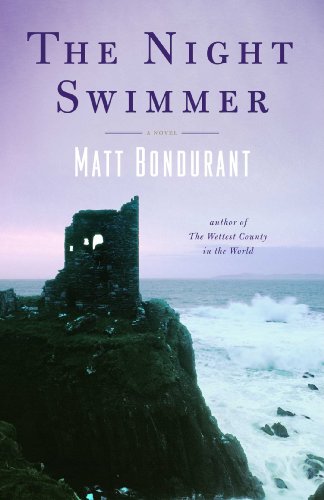 “Combine Mr. Bondurant’s love of the water with the fact that The Swimmer is probably Cheever’s most famous work, and there is a very real sense that The Night Swimmer was a predestined, literary collision waiting to happen. And there’s little doubt: It’s going to be a smash hit.”

In this his third book, The Night Swimmer, Mr Bondurant brings to life a story that is hauntingly familiar—a struggling relationship with a vast spectrum of excuses for its failings—yet with a fresh backdrop that is sweeping both in terms of geography and era.

The Night Swimmer is a fish-out-of-water tale of Americans Fred and Elly. Fred is one of life’s gifted, happy, intellectual accidents, while Elly’s focus is on her long distance swimming—a pursuit made all the more exploitable by a skin condition that ensures she floats and retains heat better than the average human being.

Early in their relationship, Elly describes how “we were all drawn to Fred. He created the life he wanted for himself, carved out his own space, something most of us never do.” But soon that wasn’t enough for Fred—or for Elly.

Frustrated and anxious for a fresh start, Fred enters a competition and wins a pub in Baltimore, County Cork, on the wild, western coast of Ireland. Told by Elly, the story is a painful perspective on a slowly disintegrating relationship and the outside pressures that heap pain on tragedy. The area is embroiled in feudal obligations to a local family, and there are disturbing flurries of Irish folklore and mysteries that provide an uneasy undercurrent to their new life.

As Fred “goes native,” Elly takes the plunge into dangerous waters from a nearby island and develops her own obsession with swimming the unswimmable: a couple of fierce, open-water miles out to the Fastnet lighthouse.

Mr Bondurant writes engagingly, and The Night Swimmer is difficult to put down, even though the lack of speech punctuation marks makes it a tricky read at times. His words are sparingly chosen and as a former competitive swimmer he nails that solitary “Neverland” that swimmers visit between consciousness and meditation, aptly described by Elly as “. . . a matter of being able to allow your body to focus on one set of sensory inputs and your mind on others. It creates a kind of separation. Like two distinct beings.”

The plot darkens with the leaden skies and a bold climax can be seen coming long before the locals ditch the island in favor of a more sheltered mainland.

The greed of both the present and the past are cleverly woven together in a broadly convincing Gaelic tapestry (though one might suppose that few old Irish country folk living in a caravan would impart to Elly the news that they make “wicked grilled cheese”!) But the characters are well drawn, if perhaps a few too many for a pick-up-put-down reader to hold in his head, and there are times when the reader is willing Fred to do something—anything—to halt the apathetic decline that at times doesn’t quite ring true for this character.

Clearly a John Cheever admirer, Mr. Bondurant also bestows this attribute on Elly and begins each chapter quoting an extract from Cheever’s work.

Combine Mr. Bondurant’s love of the water with the fact that The Swimmer is probably Cheever’s most famous work, and there is a very real sense that The Night Swimmer was a predestined, literary collision waiting to happen. And there’s little doubt: It’s going to be a smash hit.