The Night in Question: A Novel 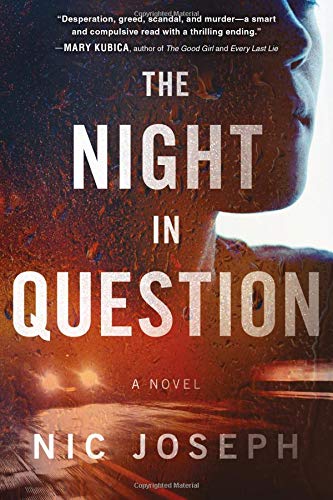 This novel has a nice setup. A driver, working for an Uber-like company, sees something she shouldn’t and later realizes what she sees could hold the key to solving a murder. The driver has inside information and should call police but cannot because she’s guilty of her own crime.

It’s a great idea by novelist Nic Joseph. Her protagonist Paula, a waitress who drives people around part-time via an app not unlike Uber or Lyft, witnesses a major pop star going into the apartment of a girlfriend for a nighttime rendezvous. Except that’s a big problem for pop star Ryan Hooks because he is married to another very popular pop singer and everyone loves the star couple. He would never cheat on Tiffane now, would he?

Paula knows he would and did but what proof does she have? The proof is in Hooks’ phone that he conveniently forgot in Paul’s car. She thinks about returning it for free but—hold on—she’s got a whole lotta problems of her own going on. Her husband Keith, a former swimming coach, is now in a wheelchair because of a car accident and spends his days drinking himself into oblivion. There is the potential of an operation that could help him but the couple does not have that kind of money. What to do?

Left to deal with an increasingly despondent husband, Paula decides to blackmail the pop star. So even though she’s committing a pretty horrible crime, some readers will sympathize. Joseph helps them along by telling the Paula part of the novel in the first person.

The rest of the story is told in the third person and focuses on a female cop named Claudia. Eventually, the chapters bounce back and forth between Paula and Claudia. Claudia is a seasoned cop and Paula is a rookie criminal, and Claudia can see right through her many lies.

A lot happens. There’s the blackmail, a murder, and a break-in and it’s all very entertaining until . . . it’s not. The reader begins to tire of all the coincidences and the many peripheral characters.

Joseph’s inspiration here could well have been The Girl on the Train by Paula Hawkins, given that both books have central female protagonists who behave in ways that make the reader want to yell “Stop!” It’s just that The Night in Question pales in comparison to Hawkins’ novel.

That said, Joseph is young and she does show promise. One hopes she will mature as a writer. Perhaps a better editor who could have helped her along. The novel is interesting and readable, but it’s not compelling the way it could have been in the hands of a more experienced writer.

It’s a valiant try and many readers may enjoy The Night in Question for the story. The writing needs work.