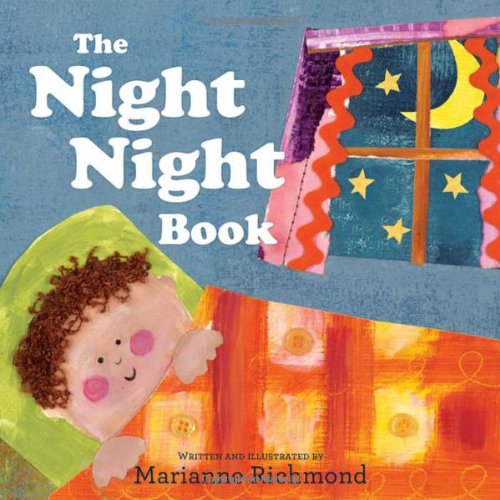 On the surface, The Night Night Book by Marianne Richmond, looks like just another bedtime book.

But don’t be fooled. Despite the apparent simplicity (just over 130 words), this small book is layered with texture.

The story begins with a small boy tucked in for the night:

Comfy bed, all tucked in.
Cozy blanket, toes to chin.

Safe and scrubbed, he begins his “night night” chant:

As he says night-night to the important objects in his life, the illustrations recount the activities of his day. Typical of a child, he remembers the small details.

At the end of the book, the boy returns from the layers of memory to his bedroom. Looking out the window, he says night-night to himself and looks forward to the next day:

The illustrations of The Night Night Book are also layered, thanks to Marianne Richmond’s mixed media approach.

On the cover, the obvious decorations stand out. The boy’s curly brown hair is made of fine yarn. The curtains are accented with two strips of orange rickrack. The quilt is decorated with three yellow buttons.

With a subtle touch, Ms. Richmond continues the button motif throughout the book. The buttons appear on the bathroom sink, the wagon, the paint smock, and even the flowers in the garden. Once readers realize this, the art becomes a game of “I Spy.”

The buttons are only the top layers of Ms. Richmond’s layered art. Underneath the buttons, cut paper is used to create the illustrations of the boy and his surroundings. Beneath the cut paper is a textured canvas, heavily stroked with paint.

The book is reminiscent of Margaret Wise Brown’s Goodnight Moon, both in the lilt of the rhythm and the hush that it casts. Yet it’s not a copycat. Rather, The Night Night Book uniquely dovetails the joyful memories of one day with the anticipation of the next.

Marianne Richmond’s story is an interesting one. She never intended to be a professional author and artist. Rather, she envisioned herself as a “V.I.E.– a Very Important Executive.” The pantyhose and cubicle life lasted all of 13 months.

Ms. Richmond began to create hand-painted cards as she recovered from a benign brain tumor. Gradually, she began to write books, beginning with The Gift of an Angel in 1997. “That decision,” she explains, “ignited a passion to write and illustrate books that honor life—the moments, the milestones, the relationships.”