The Night Fire (A Renée Ballard and Harry Bosch Novel) 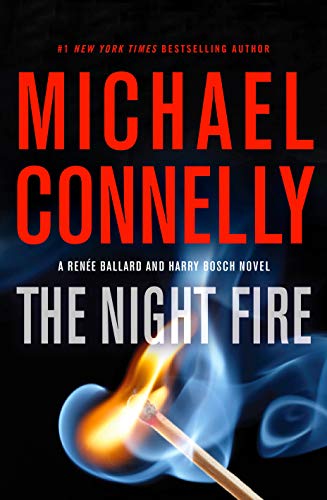 “In The Night Fire Michael Connelly delivers the goods once again, extending his legacy as quite simply the best author of police procedurals in the business.”

The Night Fire is Michael Connelly’s 33rd novel and the second featuring his new pairing of LAPD Detective Reneé Ballard and retired homicide detective Harry Bosch. In true police procedural fashion, it covers multiple cases, including an apparent teenage suicide, the immolation of a homeless man in a tent alongside the Hollywood Recreation Center, and the murder of a superior court judge in a park less than a block from the courthouse.

While Ballard investigates the first two cases during her shifts on the Late Show, working midnights out of Hollywood Division, Bosch is drawn into the murder of the judge by his half-brother, criminal defense attorney Mickey Haller. Instrumental in discrediting the DNA evidence against Haller’s client, Bosch is instantly reviled by the detectives who had worked the investigation. Undaunted, he plows into the murder book containing all the case material in search of the real killer.

Meanwhile, another case drops into his lap after he attends the funeral of his former mentor, retired LAPD Detective John Jack Thompson. Thompson’s widow passes on to him an instantly recognizable thick blue binder—another murder book, one that Thompson had apparently been sitting on for 20 years.

As Bosch begins to explore this cold case involving the gunshot death of a young man in his car in a bad neighborhood, he reaches out to Ballard for help. Their agreement is that they will work investigations together, Ballard as Ms. Inside and Bosch as Mr. Outside. However, when their apparently disparate cases suddenly begin to show commonalities, both find themselves facing risks at a much higher level than either had anticipated.

The Night Fire is a very enjoyable three-for-one. The legend of Harry Bosch, who is currently recovering from knee replacement surgery, continues forward to the delight of all his fans. In addition, readers are treated to another appearance by the Lincoln Lawyer, Mickey Haller. Then there’s Reneé Ballard, who’s earned her chops in two previous novels and works as an interesting complement to Bosch.

The tension experienced from the LAPD by Bosch as a result of having helped exonerate Haller’s client in the murder of Judge Montgomery—“a killer walks free because of you”—provides a live edge to the action, shoving Bosch into an emotional corner from which he must fight his way out.

For her part, Ballard continues in the role of the LAPD loner, working homicides that should be turned over to the appropriate division, walking a fine line between procedure and instinct. In fact, she crosses a line when she cons a captain into signing an authorization to obtain a wiretap on one of her subjects, a potentially fatal transgression Connelly must write around in order for the plot to work itself out.

Despite this flareup of moral ambiguity, something that we’ve seen before in Connelly’s plots, the novel satisfies on every other level.

His writing style remains carefully tailored to keep things moving briskly, a tribute to his journalistic training and his long experience as a storyteller.

The characters are consistent and predictable in a comfortable, reliable way. Bosch talks and thinks the way he’s always talked and thought, and Ballard is now familiar to us as a young, female echo of Bosch’s unconventional methods and non-conformist attitude with her own unique quirks thrown in.

The best part of all? On the last page the author essentially guarantees that Ballard and Bosch already have another case queued up and ready to go. Readers everywhere will smile when they put this one down at the end, reassured that the end still doesn’t seem to be anywhere in sight.

In The Night Fire Michael Connelly delivers the goods once again, extending his legacy as quite simply the best author of police procedurals in the business.