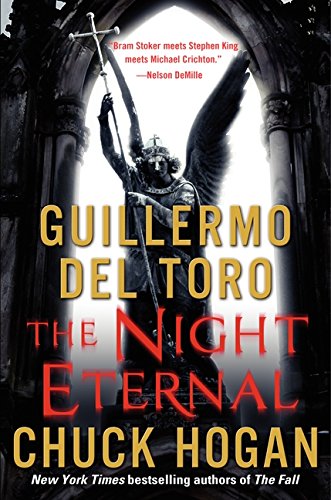 It’s been two years since the vampiric virus was unleashed in The Strain, and the entire world now lies on the brink of annihilation. There is only night as nuclear winter blankets the land, the sun filtering through the poisoned atmosphere for two hours each day—the perfect environment for the propagation of vampires.

There has been a mass extermination of humans, the best and the brightest, the wealthy and the influential, orchestrated by the Master—an ancient vampire possessed of unparalleled powers—who selects survivors based on compliance. Those humans who remain are entirely subjugated, interred in camps, and separated by status: those who breed more humans, and those who are bled for the sustenance of the Master’s vast army.

The future of humankind lies in the hands of a ragtag band of freedom fighters—Dr. Eph Goodweather, former head of the Centers for Disease Control’s biological threats team; Dr. Nora Martinez, a fellow doctor with a talent for dispatching the undead; Vasiliy Fet, the colorful Russian exterminator; and Mr. Quinlan, the half-breed offspring of the Master who is bent on revenge. It’s their job to rescue Eph’s son, Zack, and overturn this devastating new world order. But good and evil are malleable terms now, and the Master is most skilled at preying on the weaknesses of humans.

Now, at this critical hour, there is evidence of a traitor in their midst. . . . And only one man holds the answer to the Master’s demise, but is he one who can be trusted with the fate of the world? And who among them will pay the ultimate sacrifice—so that others may be saved?

Despite the hype, The Night Eternal falls far short of the expectations readers will have for the latest offering from the big-name authors. Whereas The Strain raced off from a standing start to take the reader’s breath away, The Night Eternal stumbles along for pages before anything of significance happens.

In effect, this book is a mopping up operation, dotting the Is and crossing the Ts left over from the previous books. The characters, so rounded and engaging in The Strain, are now flat and it’s difficult to care two hoots about any of them, not even Eph’s teenage son who is living with The Master and under its control.

The action is virtually limited to rushing around in trucks, mowing down vampires—“vamps” as they are frequently referred to, as if even the author couldn’t face typing another three letters—and enough sword action to exhaust fans of The Three Musketeers. Somehow, slashing and running from place to place do not come out well on the page. This kind of thing may look dramatic on screen, but this is a novel, not a screenplay.
The premise, that the earth is in almost permanent darkness and under vampire control—except Great Britain—with humans farmed for their blood, offers so much potential for a brooding, atmospheric horror. Sadly, the opportunity is missed. Instead, The Night Eternal delivers an antiseptic travelogue of NYC and environs, written in such every day, uninspiring language that every word is instantly forgotten.

If the characters’ inability to create any empathy with the reader stems from the fact that this is their third time around and they are tired, perhaps that’s an indication that this is one book too far, one squeeze of the reader’s purse too many. Perhaps the title should have been, The Story Eternal.