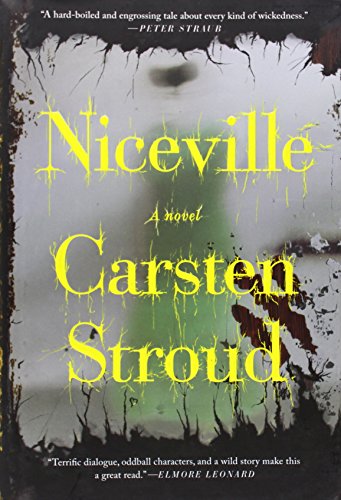 “From an excellent premise, Mr. Stroud builds a compulsive narrative that recalls the best of Stephen King, but with a twist—as though Elmore Leonard got ahold of a King manuscript just before it was submitted to the publisher and made some subtle alterations, slightly warping the characters and knocking them off center. Some of the characters in Niceville may leave a nasty taste in the mouth, but the overall composition is hearty and satisfying.”

Take a pinch of brilliant characters. Stir in some snappy dialogue and a helping of high-octane plot. Blend with a fantastically spooky location and serve hot. Carsten Stroud’s bouillabaisse of a new novel is a simmering read; one part thriller, one part suspense, and taken with a hefty sprinkling of supernatural hot spice, it’s one of the most compulsive page-turners of the year.

Written with real gusto, so that the reader can feel the author’s sheer enjoyment in the writing with every word, it’s a story in which the devil gets all the good lines. It’s a story in which an ancient grudge collides with a very modern revenge. It’s a story of wicked, and wickeder people stewing in a town that gives a whole new meaning to “haunted by history.”

Niceville is a book defying easy definition. It isn’t wholly a horror, though “maybe it’s a ghost story.” And it isn’t wholly crime either, although much of the narrative thrust at the start of the book revolves around the disappearance of a child, and then moves on to a bank heist gone wrong, at around about the quarter mark.

With everything going on, perhaps the most remarkable thing about Mr. Stroud’s achievement here is the fact he manages to keep control of all of the constituent parts and collected crimes and still manages to pull the whole thing together without it turning into stodge. The fiery pepper of the hard-boiled bank heist never spoils our tastebuds for the spookier small town stuff that actually reads a lot like a Stephen King masterpiece, think: It or The Stand. The end result is as satisfying a genre fiction read as you’re likely to experience in 2012.

Niceville begins with the disappearance of the young boy, Rainey Teague, from outside an antiques store, in full view of a sentinel security camera: “At time marker 1513:54 Rainey started to move his head backward, his mouth opening. At 1513:55 he was starting to step back onto his left heel, and his mouth was opening wider. At 1513:56 he wasn’t in the picture at all. The camera was aimed at an empty patch of sidewalk. . . . He doesn’t leap out of the picture, or duck to one side, or jump way up high, or fade away, or turn into a puff of smoke, or get jerked away by the arms of a stranger.”

Rainey simply disappears into the ether. And nobody can explain it. His mother’s reaction is fantastically drawn: “. . . her head full of white noise and her chest wrapped in barbed wire.”

The hunt for Rainey is headed-up by the book’s protagonist, Special Forces veteran Nick Kavanaugh, a Niceville outsider who now works for the local police force. And though Nick has come face to face with darkness in his previous career, nothing has truly prepared him for the shadowy, nightmare world that he must confront in order to find the truth about the town which he now calls home.

Niceville, the small town at the center of this book is as much a character as the ones in any of King’s best works. Because Niceville is far from nice. Here are the salient facts:

“Niceville had a stranger abduction rate five times higher than the national average.” And: “Niceville has logged one hundred and seventy-nine confirmed and completely random SAs since records first started being kept back in 1928.”

But simple facts do not wholly explain the strange feelings the town inspires in the characters, be they “insiders” or “outsiders.” “Niceville has a strange pulse,” says one. Or “the humid warmth of spring gave the whole town the earthy aroma of a freshly dug grave,” as another claims.

More: “Niceville had some kind of strange vibe going on, like there was some power running through it, or behind it, or under it, like a live wire, or an underground river, and this power wasn’t a kindly one. Whatever it was, it didn’t like people. There was something just plain wrong with Niceville, Merle thought, and that was all he could say about it. He’d be glad to get the hell out, once this was all over.”

The town makes characters behave differently, as though it has “put some sorta spell on us.” There is more than a sense that it has poisoned relationships and entwined itself around the branches of family trees going right back into the depths of history: “Perhaps something more basic is going on, Kate. Evil invites retribution, evil generates chaos and cruelty. You and I both know that bad acts have a way of reverberating down through families.”

A lot of the evil seems concentrated around the unique geographical features of the town, which are excellently brought to life by Stroud: “Sylvia had always thought that Niceville would have been one of the loveliest places in the Deep South if it had not been built, God only knew why, in the looming shadow of Tallulah’s Wall, a huge limestone cliff that dominated the northeastern part of the town . . . A sheer cliff so wide and tall that parts of eastern Niceville stayed under its shadow until well past noon.”

And on top of Tallulah’s Wall: “There was a dense thicket of old-growth trees on top of the cliff, and inside this ancient forest was a large circular sinkhole, full of cold black water, no one knew how deep. It was called Crater Sink.”

There is a suggestion that Crater Sink is cursed. That it is the portal through which the evil passes. In no small way, it recalls the rabbit hole in Alice in Wonderland. In the aftermath of her son’s disappearance, Sylvia Teague disappears also, and is thought to have thrown herself into the abyss.

“Even before Sylvia Teague went into Crater Sink—if she really had—Nick had always thought that Tallulah’s Wall had a kind of sickness cloud floating over it, and if anybody had told him that even the Indians who used to live here had stayed away from the place he’d have believed it. Most small towns would have made a feature like Tallulah’s Wall and Crater Sink a theme park and put ads in USA Today trying to drum up tourism, but not Niceville.”

But this hole, this portal, works both ways, and also breathes the dank evil into the town, too. It infects everyday people, changing their behaviors. “It’s just that, this job, killing those cops, you get right down to it, it was sorta out of character for us.” There is a sense that the heist and the disappearances wouldn’t be happening anywhere else but the locus around Crater Sink.

It’s Crater Sink which rots the inhabitants of the town from within, and pretty much every character seems as much “haunted by history” as the town itself. Nick, for example, has unresolved issues centering around his involvement in an incident in the Middle East which was so serious he was given early retirement from the Special Forces.

Then there’re the Bardashi Boys. Working with them is described as akin to “like sharing a hot tub with anaerobic algae.”

And then, a few rungs farther down the ladder of wickedness, we have Byron (“If he was in the movies he’d have to play one of the evil baldheaded guys with black goatees who always end up getting a balsa-wood chair broken over their heads by the curvy chick in a thong bikini who’s only trying to stop him from pounding on the good-guy hero with the long blond hair.”) And plumbing the depths of depravity, the sinister Bock (“For a short, almost dwarfish man he could radiate a lot of mulish resentment, which he generally did only when he was alone in a room with someone or something smaller . . .”)

There’s an awful lot of hatred brewing in Niceville. But there’s also the supernatural going’s on. Like Rainey’s disappearance. Like the problem with mirrors.

Mirrors play a crucial role in the story, recalling another Lewis Carroll work, Through the Looking Glass. Rainey Teague disappears after staring into an antique mirror in the shop window. And at a second crime scene later in the book, mirrors provide strange visions of another world beyond ours. This strange, liminal world the mirrors present recalls The Black House, cowritten by Stephen King and Peter Straub. They’re a way of seeing the truth of the town and the purgatorial darkness that shrouds it.

From an excellent premise, Mr. Stroud builds a compulsive narrative which recalls the best of Stephen King, but with a twist—as though Elmore Leonard got ahold of a King manuscript just before it was submitted to the publisher and made some subtle alterations, slightly warping the characters and knocking them off center. Some of the characters in Niceville may leave a nasty taste in the mouth, but the overall composition is hearty and satisfying.