Nice White Ladies: The Truth about White Supremacy, Our Role in It, and How We Can Help Dismantle It 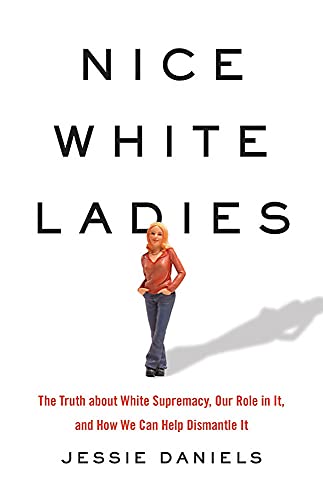 “This is a long but never less than gripping book, though the rich examples are stronger than the analysis they feed.”

In Nice White Ladies, which Jessie Daniels describes as a “deeply personal” exploration as well as an intellectual exercise, she aims “to challenge and subvert” both “whiteness” and “ladyhood”’ believing that “nice white ladies and our protection are fundamental to American culture.” Other characteristics associated with white ladyhood are thinness, hotness, blondness, heterosexuality, and being a good mother. Daniels, who has spent half her life distancing herself from white ladylike niceness, does not conform to the classic definition. Though she is white she has always been encouraged to cleave to her (perhaps fabled) Cherokee roots; she is not “petite” as her mother would have wished; and she is queer. These and other autobiographical details and personal reflections form a running thread throughout this 304-page book.

Daniels describes whiteness as a social construction rooted in British colonialism, with white women the natural appointed guardians of the purity of their race. In the US as elsewhere the boundaries of whiteness have shifted many times to incorporate, for example Italian and Jewish people, who were not originally part of the Chosen, but regarded rather as Other.

Daniels claims not entirely convincingly that the diffuseness of white identity actually strengthens whiteness as a force, making white women acknowledge membership and the advantages it brings and their role in maintaining white supremacy. The stated aim of the book which has been many years in the making is to “offer a reckoning for the damage we have done as white women, as well as a road map for undoing white womanhood and the destructiveness it causes.” The term “white supremacy” is employed in a generic way, rather than having only specific application to extremist organizations

Daniels traces the historical development of white womanhood from the white women settlers and slave owners to its crystallisation in key organizations like the United Daughters of the Confederacy (UDC) dedicated to the maintenance of the ideal of nice white lady superiority.

She believes that very few white women have been able to resist the invitation of white men to join them in domination of racialized Others. White solidarity has consistently trumped gender solidarity as she sees it. Some case studies of celebrity performers of nice white feminism such as Ivanka Trump are presented. It would have been interesting here to have had a deeper analysis of white women’s support of Ivanka’s father, and also a case study of women’s failure to rally around nice, white Hillary Clinton.

In her chapter The Trouble with White Feminism, Daniels distinguishes three different brands, namely vagina feminism or “gender-only feminism” which sees the world divided into a simple binary: men vs. women. Her father belonged to this category, which is why he taught her how to shoot a gun at a relatively early age! Carceral  feminism (“one of those clunky academic terms that’s starting to make its way into regular conversations”?), which is rooted in the belief that the State and its structures provide the best protection for women, and can help achieve feminist goals by weaponizing white feminism; and thirdly, corporate feminism that teaches that anyone can make it if they try, and underplays systemic factors preventing women  from getting access to white men’s clubs. This type of white feminism, typified by the “Lean-In” philosophy of Sheryl Sandberg, focuses on individual efforts and success rather than systemic change.

Daniels comments on the whiteness of the #MeToo movement, whose Black founder, Tarana Burke, has been eclipsed by white celebrity supporters noting that #MeToo’s whiteness reflects “the global ascendancy of mainstream Western feminism (which sees itself as universal and neutral) and the dominance of white bourgeois women within it.”

Other chapters are devoted to the whiteness of the wellness industry, typified by Gwyneth Paltrow and Goop; and the phenomenon known as “blackfishing” by which nice white ladies appropriate elements of Black women’s dress and appearance to assuage their white guilt. The Kardashians’ lips and buttocks are included as prime examples of this phenomenon though it seems quite a stretch to attribute this to their feelings of white guilt. Though there are passing mentions of other components grouped under BAME, the book’s perspective is predominantly binary.

This is a long but never less than gripping book, though the rich examples are stronger than the analysis they feed. This may be partly due to the fact that it reads as a collection of essays rather than as a coherent whole.

This book is primarily aimed at a white female American audience though British sources are mentioned with reference to the founding colonialism noted earlier, and to reflect on Princess Diana and her sacrifice to ideals of white ladyhood. Daniel’s presentation often has a dated feel, and at the same time seems to have missed some historical examples that would have been enlightening to explore. Sojourner Truth with her iconic question—Ain’t I a Woman?—to the nice white ladies at the Women’s Rights Convention in Ohio in 1851, rates only passing mentions . . . though perhaps it would have been interesting to take her as the jumping off point and to see why her question still resonates.

Daniels argues convincingly that the troubled times we are living in have made many white people for the first time recognize and start to understand and question what whiteness means. And in her concluding chapter Daniels presents the eight things white women can do “to swerve away from the supremacy of whiteness,” though very few of these efforts seem to involve action outside the white lady bubble.