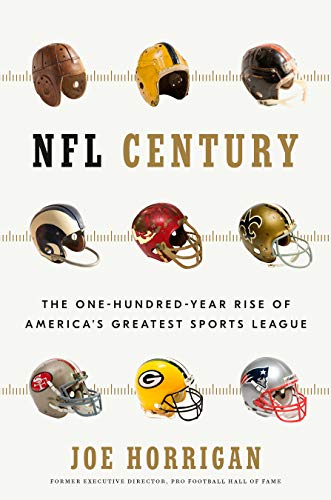 “NFL Century serves as a good primer for the league and a jumping off point for those who find the league interesting and would like to know more about its formation and development . . . It is neither a critical nor in depth history . . . But it is a fascinating reminder of how far the NFL has come.”

The subtitle of Joe Horrigan’s book covering the first century of the National Football League proudly proclaims it to be, “America’s Greatest Sports League.” In large part thanks to the Super Bowl, the NFL has unquestionably become the most dominant organization on the sports landscape, with its crowning of a champion having morphed into a pseudo national holiday. However, it was not always that way, as the recently retired executive director of the Pro Football Hall of Fame entertainingly points out.

Horrigan, considered by many to be the most pro game’s most knowledgeable historian, began his career at the sport’s shrine more than 40 years ago as the Hall’s curator-researcher. He is at his best describing the league’s first quarter century, with fascinating stories of Red Grange and George Halas and teams like the Providence Steam Roller and the Frankford Yellow Jackets.

Although much of the first quarter of the book revolves around the business aspects of the game’s development, growing out of a tough semi-pro league based in Ohio, he writes in an easy style that betrays his interest in the subject and in turn piques the reader’s. Horrigan covers the initial league meeting in the showroom of a Hupmobile dealership, along with an amusing anecdote that the other team representatives thought the Racine Cardinals were from Wisconsin—Racine was actually the name of a street in Chicago on which the team’s playing field was located.

Other fascinating tidbits include the first night football game in November 1929, with the pigskin painted white to make it more visible. The contest pitted league powerhouse Providence against the Chicago Cardinals, which featured star running back Ernie Nevers.

Later that year, the Portsmouth Spartans (now the Detroit Lions) and the Chicago Bears finished the season tied for first place and the league staged its first playoff. The weather was such that the game was played indoors, resulting in a field only eighty yards long and featuring “half-moon shaped end zones.” A combination of dirt and mulch was shipped in to provide the playing surface. Upon reaching mid-field, a team was set back 20 yards so that the regulation 100 yards would be required to traverse the field to the end zone.

It would be some time before the NFL could credibly claim the mantle awarded by the book’s subtitle—as late as 1970, the Chicago Bears played home games at Wrigley Field, where the corner of one of the end zones terminated in a baseball dugout.

The league of course grew in stature along with the growth in television as the center of the American home. As that growth occurs, Horrigan covers the NFL’s major developments including the hiring of Pete Rozelle and his influence as Commissioner, the rise of the players union, the league’s merger with the AFL and the creation of the Super Bowl, the birth of Monday Night Football--which proved that the game could be sold as entertainment—and the development of super teams such as the Steelers, 49ers, Cowboys, and Patriots, changing the game for fans from one of regional support to one whose teams had a national reach.

Because it is a single volume, fast-moving history covering 100 years, NFL Century does not go into depth on most subjects. It is not a critical look at the league and its personalities, so there is little criticism. For instance, there is no mention of the league’s battles over the issue of concussions and the long-term effects that are arguably changing the game. The controversy of recent franchise shifts is not discussed.

Some of the coverage seems a bit fawning at times, glossing over imperfections of people and the game. As a result, the second half of the book is not as interesting because it is familiar territory. There is no news here. After one has feasted on the little told stories of the league’s early years, the stories of the past three decades do not hold the same fascination.

NFL Century serves as a good primer for the league, and a jumping off point for those who find the league interesting and would like to know more about its formation and development, especially its fascinating early days. It is neither a critical nor in depth history, nor is it meant to be. But it is a fascinating reminder of how far the NFL has come.